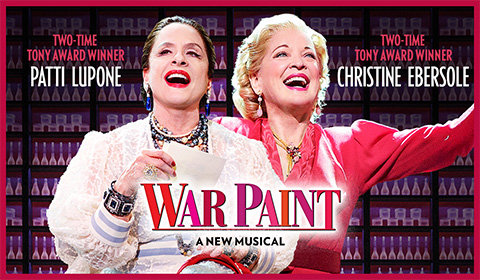 Nederlander Theatre
0 seat views
Patti LuPone and Christine Ebersole make much-anticipated returns to Broadway in 2017 for new musical War Paint. Based on the true story of cosmetics giants Helena Rubenstein and Elizabeth Arden, the show runs at the Nederlander Theatre.

In the first half of the 20th century, female entrepreneurs were few and far between. But with the rise of mass cosmetics consumption, Helena Rubenstein and Elizabeth Arden built empires dedicated to beauty; they also nursed an enthusiastic rivalry that drove them from humble beginnings to the halls of Congress. Charting the power and influence of women in a male-dominated landscape, War Paint is a sharp and unique new musical with songs including "If I'd Been a Man" and "Best Face Forward".

Patti LuPone and Christine Ebersole co-star as Rubenstein and Arden. LuPone is a titan of the stage, having earned her first Tony Award in 1980 for Evita. Since then, her credits include Fantine in the original London production of Les Misérables and an Olivier Award-winning turn as Joanne in Company (2018).

Taking a unique look at the booming makeup and beauty industry, War Paint at the Nederlander Theatre is a compellingly entertaining musical about the hustle and resourceful determination that drove two of the world’s richest women.

Special notice: Fans of LuPone and Ebersole’s formidable talents on stage would love War Paint, a musical that sees them let rip as two unforgettable women. Anyone who likes learning about lesser-known figures in history will also enjoy this fresh new musical.

War Paint seat view photos show what view you will get for your money. Unfortunately we do not have any seat views for this show.