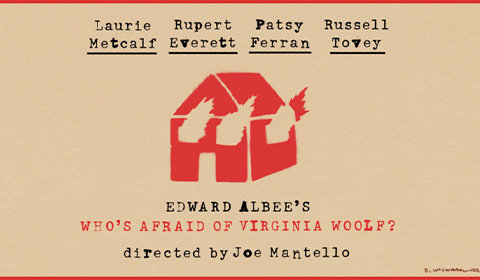 Who's Afraid of Virginia Woolf? tickets

Please note that remaining performances of Who's Afraid of Virigina Woolf? have been cancelled following government advice regarding coronavirus (COVID-19).

Two-time Tony Award winner Laurie Metcalf continues a winning Broadway streak as she takes on Who’s Afraid of Virginia Woolf? opposite Rupert Everett. This outrageous – and outrageously entertaining – play from Tennessee Williams will open at the Booth Theatre.

With alcohol flowing freely and resentments growing, Nick and his wife Honey find themselves caught in an intoxicating web of mind-games and revelations as the older couple’s marital woes are played out for an audience.

Metcalf is joined in the four-hander by BAFTA and Golden Globe nominee Rupert Everett (Another Country; My Best Friend’s Wedding), Olivier Award winner Patsy Ferran (Summer and Smoke) in her Broadway debut, and Russell Tovey (Angels in America; The History Boys).

Director Joe Mantello previously worked with Metalf on the Tony Award winning Three Tall Women and Hillary and Clinton. With awards including an Obie membership of the Theatre Hall of Fame, he is also helming an adaptation of The Boys in the Band for Netflix.

With an incredible cast from both sides of the Atlantic, this revival of a caustic classic is a hot ticket for Broadway’s 2020 season.

Special notice: Anyone who can’t get enough of Laurie Metcalf’s transcendent stage performances should secure tickets for her turn in Who’s Afraid of Virginia Woolf?. The play is also perfect for fans of classic American drama.

Who's Afraid of Virginia Woolf? seat view photos show what view you will get for your money. Unfortunately we do not have any seat views for this show.