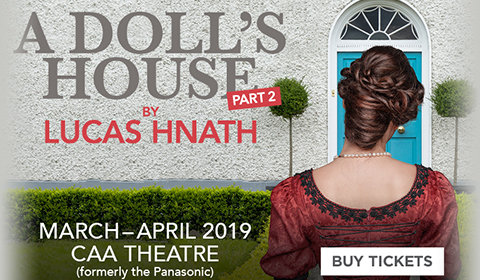 CAA Theatre
0 seat views
Tony Award-nominated playwright Lucas Hnath brings his new play to Toronto, following a stunning Broadway premiere at the John Golden Theatre in 2017. An unofficial sequel to Ibsen’s 1879 masterpiece, the action takes place after Nora slams the door on her current life. The production plays a limited season at the CAA Theatre.

A smart and funny new play, A Doll’s House, Part 2 continues Nora’s story from the original script, where the final scene sees Nora Helmer close the door on her husband and children to live a life on her own. Propelling the drama into a modern age, we follow Nora as Nora returns to the life she once had. But what did she leave behind?

A Doll’s House, Part 2 is directed by Krista Jackson, whose credits include The Seagull, Private Lives and The Lion in Winter. The play is written by Lucas Hnath, whose other works include The Christians, Isaac’s Eye and A Public Reading of An Unproduced Screenplay About the Death of Walt Disney.

A visceral play that wowed audiences and critics alike, A Doll’s House, Part 2 arrives in Toronto to play a strictly limited season. The production runs at the CAA Theatre from 23 March to 14 April 2019.

Special notice: Recommended for mature audiences, this play is perfect for theatre-lovers. Fans of Ibsen’s original drama will be thrilled by this sequel, which recreates the tone of the famous playwright’s work.

A Doll's House, Part 2 seat view photos show what view you will get for your money. Unfortunately we do not have any seat views for this show.