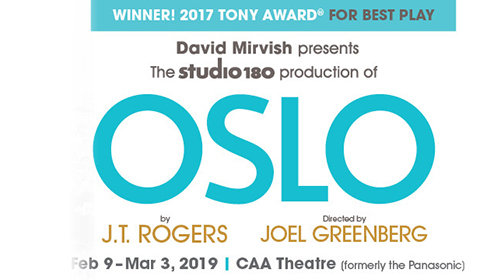 Oslo is the political thriller that sees a small group of men and women fight together to change the world. How did the pair keep their negotiations a secret? Why were in a hidden away castle in Norway? A startling tale of personal stories and epic historical achievements, this darkly funny and poignant new work makes its Canadian premiere.

Originally directed by multi-award winner Bartlett Sher, the production is directed by Joel Greenberg, who forms part of the CAA Theatre’s Studio 180 Theatre team. A Chalmers and Dora Award-winning playwright director, he has helmed over 100 productions across Canada, including The Laramie Project and My Night with Reg.

After an off-Broadway run, Oslo transferred to the Lincoln Center before making its way across the pond to London, where it premiered at the National Theatre. Following a sold-out season, the show later transferred to the West End’s Harold Pinter Theatre. Oslo arrives in Toronto to play at the CAA Theatre, from 9 February to 3 March 2019.

Special notice: Those who enjoy political dramas and contemporary history will discover a whole new breed of politics in JT Rogers’ pertinent new play, which is a revealing take on true events.

Oslo seat view photos show what view you will get for your money. Unfortunately we do not have any seat views for this show.