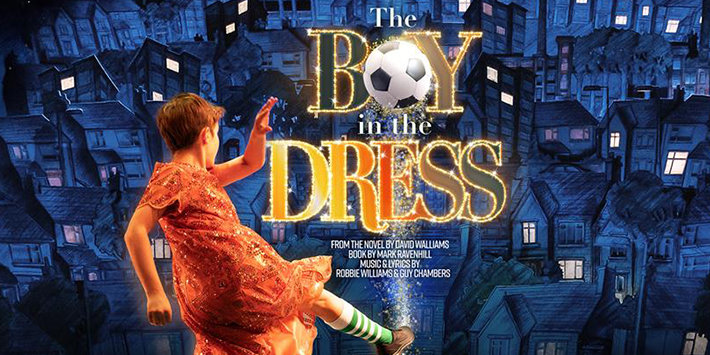 The Boy in the Dress tickets

David Walliams’ bestselling book The Boy in the Dress has been adapted into a stage musical by the Royal Shakespeare Company, with an original score by Robbie Williams and Guy Chambers.

Following five-star reviews and sold-out audiences at the Royal Shakespeare Theatre in Stratford Upon Avon between November 2019 and March 2020, the production is expected to hit London’s West End later this year.

The Boy in the Dress follows 12-year-old star-striker and fashion lover Dennis. Life gets tough when his mum leaves home and Dennis’ only reminder of her is a photo of her in a beautiful yellow dress. What do you do if you like football and fashion? And how will the school react when Dennis breaks the strict uniform code by wearing a dress?

British music icon Robbie Williams has teamed up with his long-term writing partner Guy Chambers to pen 16 original compositions for the show. Throughout their 20-year collaboration the duo worked on some of Williams’ best-known tracks including Angels, Millennium, She’s the One, Rock DJ and Let Me Entertain You, winning three BRITs and Ivor Novello Awards.

David Walliams is best known for co-creating BBC sketch show Little Britain and judging hopefuls on Britain’s Got Talent. His children’s writing career has seen him pen thirteen novels, selling over 25 million copies worldwide. Several of his books have previously been adapted for the stage, including Mr Stink, Billionaire Boy and Gangsta Granny.

The stage adaptation of The Boy in the Dress has been written by acclaimed playwright Mark Ravenhill and directed by RSC Artistic Director, Gregory Doran. The production features design by Robert Jones, choreography from Aletta Collins, lighting by Mark Henderson and sound design from Paul Groothuis and Tom Marshall.

Four young actors alternate the lead role of Dennis, with a talented child cast also playing key roles in the show. Adult casting includes comic actor Rufus Hound (The Wind in the Willows) as Dennis’ dad, Irvine Iqbal (Aladdin) as shopkeeper Raj, Natasha Lewis (Priscilla, Queen of the Desert) as Darvesh’s mum, and Forbes Masson (Little Shop of Horrors) as headmaster Mr Hawtrey. Casting for the upcoming London production is to be confirmed.

This joyous new musical promises a solid gold score, hilarious script and an irresistible celebration of acceptance and standing out from the crowd.

Special notice: The Boy in the Dress can be enjoyed by the whole family. Fans of world-class British musicals like Matilda the Musical, Everybody’s Talking About Jamie and Billy Elliot will love this heart-warming comedy.