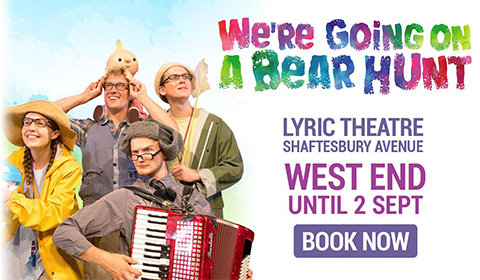 The gentle adventure story follows a family and their musical dog as they go looking for a bear on a particularly beautiful day. Little ones will know whether the children succeed or not, but this show charms with its simplicity, music and wonderful puppetry.

We’re Going on a Bear Hunt features colourful design to enthral and immerse theatregoers of all ages. Journey with the adventurous family through swishy, swashy grass to a splishy sploshy river and back again, accompanied by bright colours, interactive music and sound, creating a fun and engaging atmosphere for young children and their families.

Director Sally Cookson is an artistic associate of Bristol Old Vic, and boasts impressive directing credits in theatre for both children and adults. Passionately believing that children’s theatre should be regularly produced in all major theatres, she has previously created the Olivier Award-nominated Hetty Feather and a devised production of Jane Eyre, that recently ran at the National Theatre.

A charming cast of four actors bring Rosen’s story and Benji Bower’s new music and lyrics to life in this hour-long show that will capture the attention of tiny theatregoers. With plenty to look at and catchy music, We’re Going on a Bear Hunt plays at the West End’s Lyric Theatre from 4 July to 2 September 2018, perfect for families in the summer.

Special notice: Families with young children will love the colourful, musical world this show creates. Children in primary school may find the story too simple, but there’s a great sense of adventure that appeals to all ages.

Sorry this show closed 02 September 2018, we recommend these similar productions.

We're Going on a Bear Hunt seat view photos show what view you will get for your money. Unfortunately we do not have any seat views for this show.