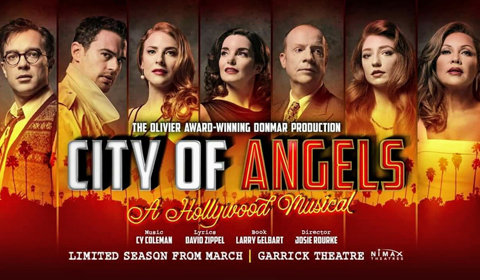 An irresistible homage to film noir

Take a turn down the mean streets of Los Angeles with Broadway hit City of Angels. This rarely staged musical pastiche runs at the Garrick Theatre for a limited season.

Set in the glamorous but grimy world of Old Hollywood, City of Angels follows crime writer Stine as he adapts his famous novels for the big screen. Merging fact and fiction as Stine’s dogged detective works to crack the case, the musical is an ingenious tribute to film noir, full of swinging songs including "Double Talk" and "I'm Nothing Without You".

First opening at Covent Garden's Donmar Warehouse, this "blissful" (The Stage) revival of a Broadway classic won the Olivier Award for Best Musical Revival in 2015. The show features a book by Larry Gilbert, music by Cy Coleman and lyrics by David Zippel.

Get swept up in a story of starlets, sirens, and rugged detectives with City of Angels tickets - you'd be a fool to let this musical femme fatale get away.

Sorry this show closed 05 September 2020, we recommend these similar productions.

City of Angels seat view photos show what view you will get for your money. Unfortunately we do not have any seat views for this show.