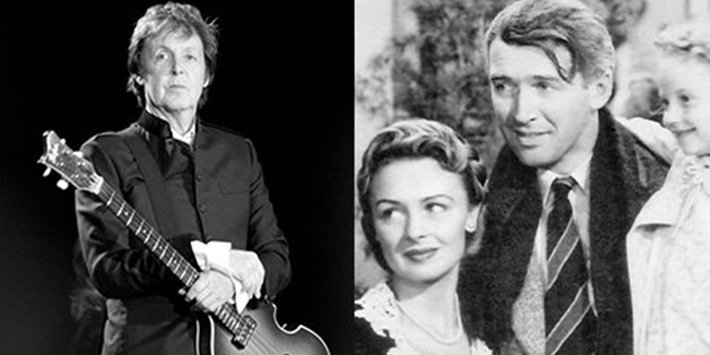 It's a Wonderful Life Tickets

After conquering the music industry over the last six decades, Sir Paul McCartney is now turning his talents to the world of theatre, penning his first ever stage musical – an adaptation of the classic Christmas film, It’s a Wonderful Life.

The 1946 film tells the story of George Bailey who, on Christmas Eve, is on the verge of taking his own life. As he contemplates his life, he is visited by a guardian angel who shows him how different life would be for his family and community had he never been born.

The film has become one of the most beloved Christmas films, topping polls by both the Radio Times and Odeon Cinemas. It has also been listed as one of the 100 best American films ever made by the American Film Institute and was nominated for five Academy Awards, including Best Picture.

Widely regarded as one of the most influential musicians of all-time, McCartney is an 18-time Grammy Award winner and has been inducted into the Rock and Roll Hall of Fame twice, first as a member of The Beatles and again as a solo artist a decade later. He holds the record for ‘most successful composer’ according to the Guinness Book of World Records, having written or co-written 188 charted records in the UK, 33 of which went to number one.

In 1997 he was knighted by the Queen for services to music and continues to be recognised for his lifetime contributions to the industry.

For his adaptation of It’s a Wonderful Life, McCartney is collaborating with celebrated writer Lee Hall (Billy Elliot, Rocketman) on the lyrics, with Hall also writing the book. The musical is being produced by Bill Kenwright, known for his productions of Blood Brothers and Joseph and the Amazing Technicolour Dreamcoat. Further creatives are yet to be announced.

Venue and performance dates are yet to be confirmed, but the production is currently slated to open in the West End soon!

Special notice: Written by one of the most celebrated composers, It's a Wonderful Life, is going to be one of the hottest tickets of the year. It will be the perfect Christmas treat for those who enjoy watching the original film.