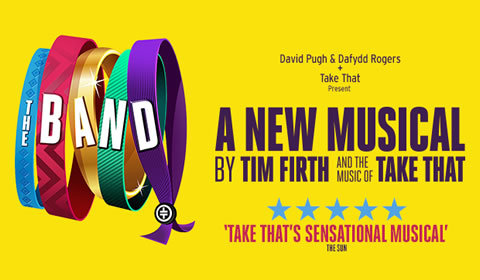 Theatre Royal Haymarket
36 seat views
Take That’s sensational new musical The Band comes to the West End for a strictly limited 50 performances, playing at the Theatre Royal Haymarket. Featuring the music of Take That and the winners of the BBC’s talent search Let It Shine, smash-hit production arrives in London for a limited run beginning December 2018.

It’s 1992 and an inseparable group of 16-year-old girls are completely devoted to their favourite band. Fast-forward 25 years, and that same group of friends reunite with the goal of meeting the boyband heroes of their teen years.

Written by Tim Firth (The Girls, Neville’s Island, Our House), the new musical premiered in Manchester in 2018 before embarking on a national tour that quickly became the fastest-selling touring production of all time. Featuring a back catalogue of Take That’s greatest hits, songs include “Never Forget”, “Back For Good”, “A Million Love Songs”, “Greatest Day”, “The Flood”, “Relight My Fire”, “Shine” and “Rule the World”.

Rapidly developing a huge fan base, prepare to laugh and cry as this smash-hit new musical hots the West End. The Band plays limited performances at the Theatre Royal Haymarket from 1 December 2018 to 12 January 2019, with a gala night on 5 December 2018.

Sorry this show closed 12 January 2019, we recommend these similar productions.

The Band seat view photos show what view you will get for your money. Click 'book this seat' and we will search for availability for your chosen seat.