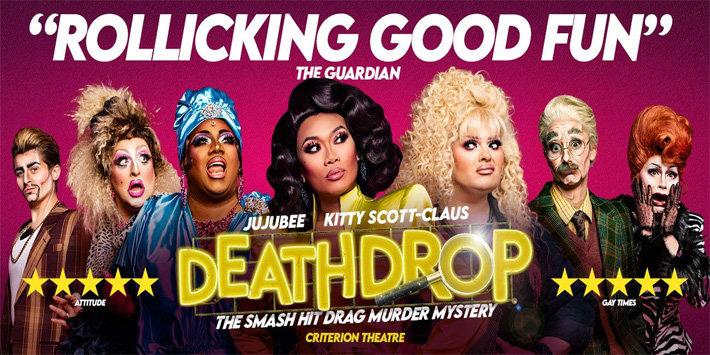 Forget Colonel Mustard with the clay pipe - the classic murder mystery gets a glamorous makeover as Death Drop sashays into the West End.

This spectacular send-up of Agatha Christie’s cosy crime stories transports audiences to the mysterious Tuck Island in 1991, where outrageous secrets are about to be exposed at a dinner party like no other.

As the guests air their dirty laundry and point their (perfectly manicured) fingers in murderous accusation, audiences will be in stitches before discovering whodunit!

Death Drop is based on an idea by Christopher D. Clegg and written by Holly Stars, with RuPaul’s Drag Race stars JuJuBee and Kitty Scott-Claus leading an all-drag cast in the West End.

Sissy that walk down to the Criterion Theatre with Death Drop tickets for a hilarious evening of vicious reads, sordid secrets and side-splitting comedy from some of the UK’s top drag artists.

Death Drop seat view photos show what view you will get for your money. Unfortunately we do not have any seat views for this show.

As a fan of RPDR and RPDRUK, this was a must see show for me, especially with Jujubee and Kitty S... More

As a fan of RPDR and RPDRUK, this was a must see show for me, especially with Jujubee and Kitty Scott Claus being in the cast. (Their roles have been played by various RPDR alumni). I didn’t expect an Olivier award style performance, but it far exceeded my expectations. If you put into the melting pot Agatha Christie, Clue and RPDR, you will have the basic ingredients of Death Drop. So if you’re looking for a show with murder and mayhem in killer heels, and a stellar sequinned cast who serve you a belly full of (crispy pancake) laughs, this truly is the show for you. Written by the wittily talented Holly Stars, this show features drag artists: Vinegar Strokes, Anna Phylactic, Richard Energy & Georgia Frost. It’s a smörgåsbord of irreverence, bad taste and pure, unadulterated vulgarity, but it’s everything you’d expect, or want, from a RPDR acting challenge, or Rusical. (There are a few musical numbers, which are delivered with true RPDR humour). There are plenty of laugh out loud moments throughout, and the comic timing is on point. Even though there were a lot of predictable jokes (especially at the expense of well known UK celebrities and shows) it all added to the camp frivolity of it all. Ru Paul herself even gets a mention. Would I see the show again? You bet your bottom dollar I would. Every character had their chance to shine and draw you further into the show. (I hope there will be future shows featuring RPDR queens).

Incredibly funny and witty! My jaw ached from laughing so much! The cast were fabulous, the costu... More

Incredibly funny and witty! My jaw ached from laughing so much! The cast were fabulous, the costumes hilarious and the acting was first class!! Could sit through this again and still cry with laughter!

A fabulous show that is perfect for most people! It is hilarious, ridiculous and just plain enter... More

A fabulous show that is perfect for most people! It is hilarious, ridiculous and just plain entertaining. Every single cast member played their character in such an amazing way that I believed them. Death Drop is a show to catch on the West End, this is my second time seeing it and it just keep getting better!

Very funny although a bit cheesy. Richard Energy, Georgia Frost and Jujubee stole the show with their hilarious movements and delivery of their lines!!

This show was hilarious! We saw Jujubee and Kitty Scott-Claus in our show. Having seen them both... More

This show was hilarious! We saw Jujubee and Kitty Scott-Claus in our show. Having seen them both on television, I had an idea that it would be a brilliant show, but this was even better! I hadn't been to a drag show before this, so wasn't entirely sure what to expect but it's safe to say I'll go to many more in the future!! If you love drag and a good old murder mystery (with a bit of improv thrown in (I'm not 100% sure everything was to script ;) )), then this is the show for you!

Fun show and silly. Not the most polished but fun for sure and I much preferred this as a modern... More

Fun show and silly. Not the most polished but fun for sure and I much preferred this as a modern drag take on Mousetrap