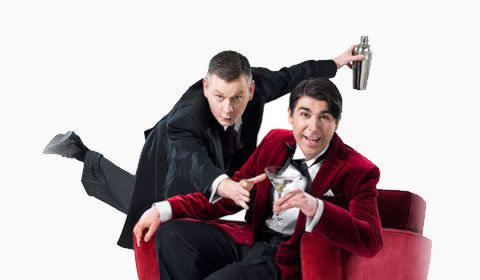 Duke of York's Theatre
7 seat views
Sean Foley (The Ladykillers, The Play What I Wrote) directs Jeeves and Wooster in Perfect Nonsense, a hilarious adaptation of P. G. Wodehouse’s famous characters. Jeeves and Wooster is a new play written by David and Robert Goodale, and is based on Wodehouse’s 1938 novel The Code of the Woosters. Following a short UK tour, the production opened at the Duke of York’s Theatre in October 2013, where it continues to run.

Winning the 2014 Olivier Award for Best New Comedy, Jeeves and Wooster follows effervescent, aristocratic fool Bertie Wooster and his short-sightedly dutiful valet Jeeves. When a weekend at the country house takes a turn for the worse, Wooster is called upon to play matchmaker, but must also steal a silver cow creamer from Totleigh Towers. Luckily the utterly dependable Jeeves is there to prevent Bertie from making a fool of himself in front of a selection of Wodehouse’s best-known characters, including Gussie Fink-Nottle, Madeline Bassett, Sir Watkin Bassett, Dahlia Travers, Roderick Spode and Constable Oates!

Jeeves and Wooster’s original cast included Matthew Macfadyen as Jeeves and Stephen Mangan as Wooster, alongside Mark Hadfield as Seppings, whose roles were then taken over by Robert Webb and Mark Heap. Now, the production stars John Gordon Sinclair (The Ladykillers, The Producers) as Jeeves and James Lance (Teachers, I’m Alan Partridge) as Wooster, alongside the play’s co-writer Robert Goodale as Seppings.

Special notice: Those who are fans of Wodehouse’s eccentric characters will love seeing them live on stage. Suitable for a wide range of ages, this high-energy comedy is sure to entertain the broadest of audiences.

Sorry this show closed 20 September 2014, we recommend these similar productions.

SeatPlan Recommends: Sit in the Royal Circle for the best overall view of the stage, even towards the rear of the section, where bargain seats are usually on offer! Be aware that the front couple of rows in the Stalls may be restricted due to the height of the stage.