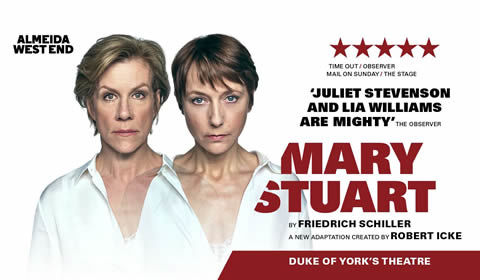 Duke of York's Theatre
32 seat views
After receiving critical acclaim as part of a sold-out season at the Almeida Theatre in 2016-2017, Robert Icke’s captivating new adaptation of Mary Stuart makes its exciting West End transfer next year. The show will play a limited run at London’s Duke of York’s Theatre, with tickets available for performances between the 13th January to 31st March 2018.

Two monarchs sit in London. One on the throne. One in a jail cell. As the fate of the country hangs in the balance. Freidrich Schiller's brutal political tragedy depicts the last days of Mary, Queen of Scots, taking the audience behind the scenes on some of British history’s most critical and formative moments.

The roles of Elizabeth I and Mary Stuart will be portrayed by the five time Olivier Award nominee Juliet Stevenson (Hamlet, Measure for Measure, Yerma) and the incredible Lia Williams (Oresteia, Skylight). The actors will trade the play’s central roles, determined at each performance by the flip of a coin.

Juliet Stevenson is a RADA trained actor, part of the ‘new wave’ of performers to graduate from the institution such as Alan Rickman, Kenneth Branagh, Imelda Staunton and Fiona Shaw. She was awarded the Olivier Award for Best Actress for her seminal role as Paulina in Death and the Maiden and has worked extensively in television, boasting BAFTA nominations for A Doll's House, The Politician's Wife and Accused.

Lia Williams who early in her career received Critics' Circle Theatre Award for Most Promising Newcomer has gone on to appear regularly at the National Theatre and with the Royal Shakespeare Company. She has previously worked with Icke on his version of Aeschylus’ Oresteia which also transferred from the Almeida to the West End.

These two immeasurably talented performers beautifully portray the two sides of the regal coin, whichever version audiences manage to catch they are promised a unique and hauntingly compelling tale from beginning to end, so don't miss out and get your Mary Stuart tickets now.

Special notice: British history buffs and fans on the Almeida’s classical seasons should not miss their second chance to get tickets to Mary Stuart, an emotive, compelling drama.

Sorry this show closed 31 March 2018, we recommend these similar productions.

SeatPlan Recommends: For this exciting and intimate chamber piece drama the stalls are by far the best vantage point. A few rows back from the stage is ideal to avoid the Duke of York’s slightly raised stage.

I thought it was a superb performance. It blew me away because of the fact that the main two cast... More

I thought it was a superb performance. It blew me away because of the fact that the main two cast members didn't know which character they would play until they tossed a coin on stage.

The whole premise of the play was great, right from the start with the two leads spinning a coin... More

The whole premise of the play was great, right from the start with the two leads spinning a coin to decide who plays which part (imagine learning both parts!), up until the ending, where historically you know what will happen but its interpretation on the stage makes it so clear, understandable and poignant. A terrific cast and simple, effective set design.

Excellent revival of Schiller's dramatic masterpiece, in a great adaptation/translation by Robert... More

Excellent revival of Schiller's dramatic masterpiece, in a great adaptation/translation by Robert Icke. Lia Williams and Juliet Stevenson alternate in the roles of Mary Stuart and Elizabeth I, they're both excellent and can count on equally brilliant supporting performances. It's quite thrilling and even if everybody knows how it's gonna end, the crucial scenes keep you on the edge of your seat: a great night of theatre, with a strong pace and quite humorous at times.

Absolutely brilliant portrayal of a fascinating historical event. Loved that the two actresses both appeared identically dressed and the spin of a coin determined who played which role.

The show was a very good retelling of Schiller's play, with Robert Icke’s new version managing to... More

The show was a very good retelling of Schiller's play, with Robert Icke’s new version managing to make Mary Stuart incredibly engaging and fresh, while still containing a classic sense of drama. The set and costumes are sparse and simple, instead focusing on the dialogue, which manages to be gripping and fast paced, despite being quite a lengthy play. Subtle backing music often manages to give scenes a film-like quality, while not feeling too melodramatic.

This show was exceptional! Which of the ladies will take the lead is decided by a coin flip on s... More

This show was exceptional! Which of the ladies will take the lead is decided by a coin flip on stage at the start. The role of the nurse (we felt) was a bit weakly cast but all other roles were very well done. 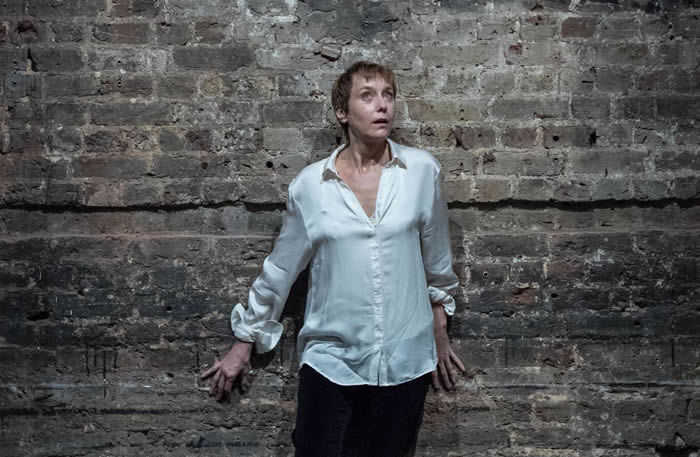 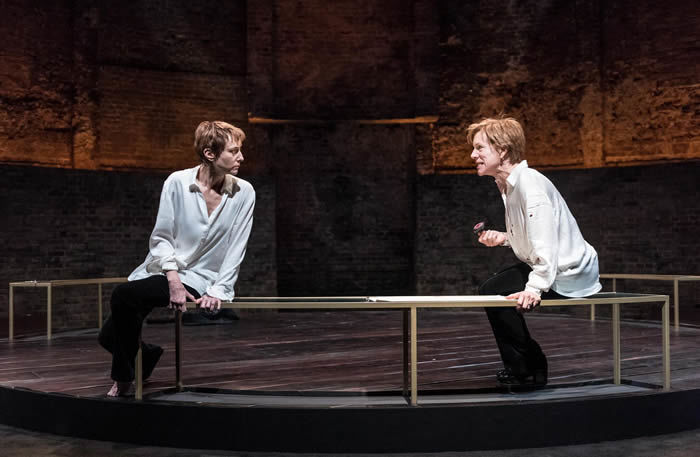 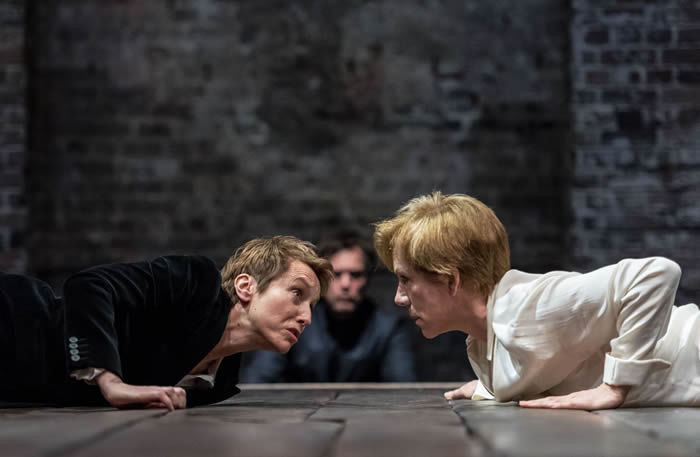 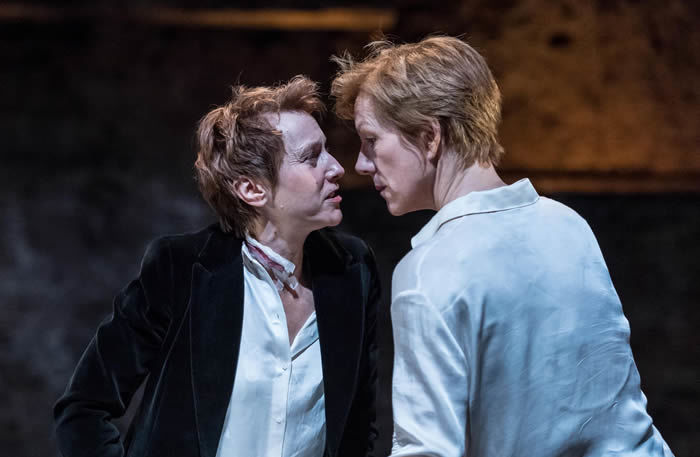 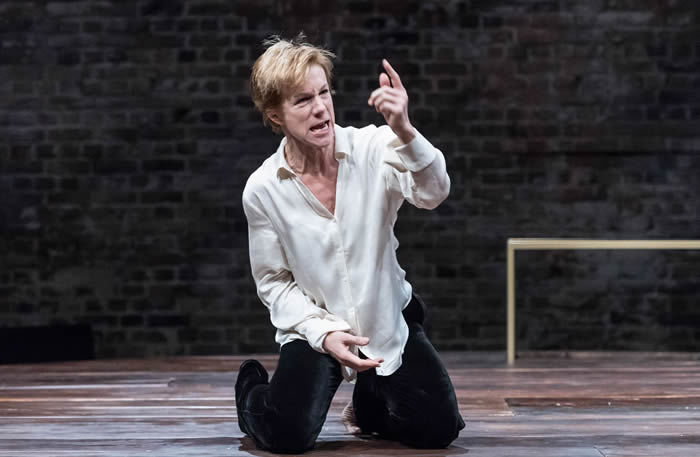 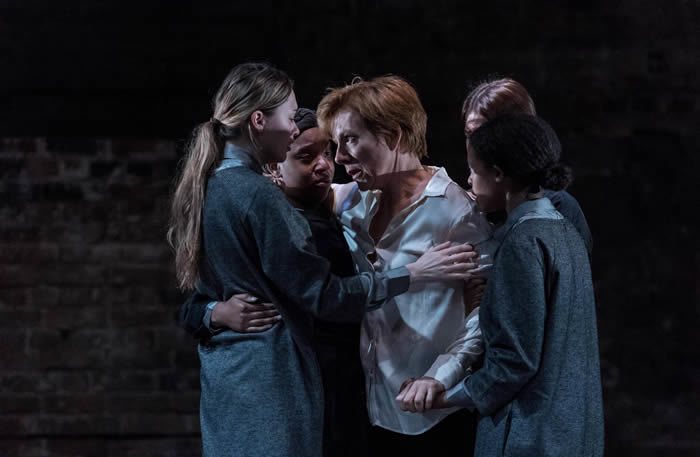