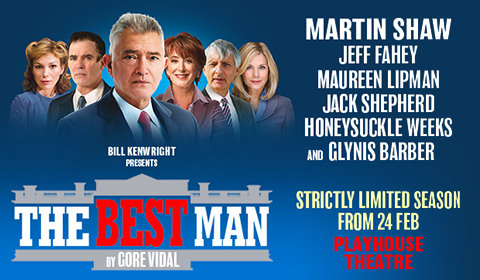 Playhouse Theatre
18 seat views
Producer Bill Kenwright brings his hugely successful 2017 touring production of The Best Man to the West End’s Playhouse Theatre this spring, starring Martin Shaw. With numerous good reviews behind it, this politically prescient play is guaranteed to resonate with London audiences, at a time when American politics are a fiercely debated topic.

Gore Vidal’s 1960 play about a US presidential election with two candidates on opposite sides of the moral compass parallels the Democratic Party at the time, when Kennedy ran against Adlai Stevenson for the party’s nomination as presidential candidate. However, the play’s resemblance to the 2016 election between Trump and Clinton makes it just as relevant today, despite its 1960’s setting.

In the summer of 1960, populist senator Joseph Cantwell, known for his unscrupulous and fraudulent behaviour, is running against morally upright liberal, William Russell. As the two battle it out, they both seek support from the current President. This endorsement could be the deciding factor between who leads the country and who disappears into obscurity.

The Best Man is directed by Simon Evans, with design by Michael Taylor and lighting design by Chris Davey, as well as sound and compositions by Ed Lewis. The sizzling political drama runs at the Playhouse Theatre for a strictly limited season, from 24 February to 26 May 2018, with a press night on 5 March 2018.

Sorry this show closed 26 May 2018, we recommend these similar productions.

The Best Man seat view photos show what view you will get for your money. Unfortunately we do not have any seat views for this show.