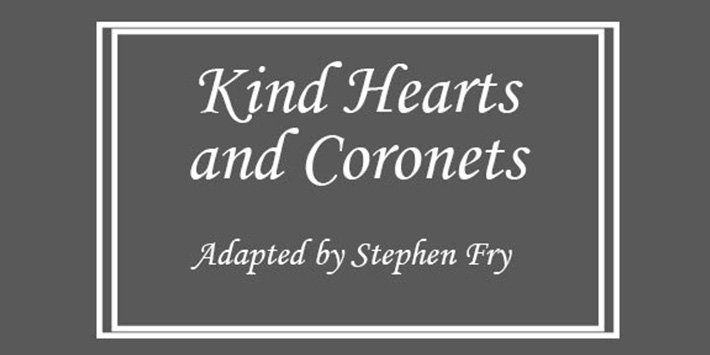 Two British national treasures combine as Stephen Fry adapts one of Ealing Studios’ best-loved comedies for the stage. Kind Hearts and Coronets is a classic black comedy about vengeance, ambition and murder amongst the Edwardian aristocracy.

Influential producer Sonia Friedman is reportedly planning to bring Fry’s script to a stage in London in the near future, depending on venue availability and casting. Sean Foley, who has directed other Ealing adaptations The Ladykillers and The Man in the White Suit will direct Kind Hearts and Coronets.

The 1949 film, loosely based on the Roy Horniman novel Israel Rank: The Autobiography of a Criminal, tells the story of Louis D'Ascoyne Mazzini, the son of a Duke’s daughter who has been disowned from her family for eloping with an Italian opera singer. After losing both his parents, Louis decides to murder the eight people ahead of him in the succession to the Dukedom of Chalfont. Famously, Oscar-winner Alec Guinness (Bridge Over the River Kwai and the original Obi-Wan Kenobi in Star Wars) played nine different characters in the film, each a member of D'Ascoyne family.

Casting for the stage adaptation has not been announced. As Alec Guinness played Sidney Stratton in the original The Man in the White Suit a popular guess is that Stephen Mangan, who played that role in the 2019 production at the Wyndham’s Theatre, might be in talks to play the many parts that Guinness played in the film. Of course, this is only speculation until the cast is officially announced.

Stephen Fry is no stranger to writing for the theatre, having found early success with his Edinburgh fringe play Latin! or Tobacco and Boys and his highly acclaimed 1984 West End adaptation of musical Me and My Girl.

Kind Hearts and Coronets promises to be a return to the kind of high-energy, dark humour that Ealing Studios were so well known for. With a legendary scribe such as Stephen Fry and the theatrical powers of Sonia Friedman and Sean Foley behind it, this is sure to be a certified West End hit.

Special notice: Anyone who enjoys a good laugh in the theatre, particularly fans of Ealing’s signature style. If you enjoyed previous adaptations such as The Ladykillers and The Man in the White Suit, then this is for you.