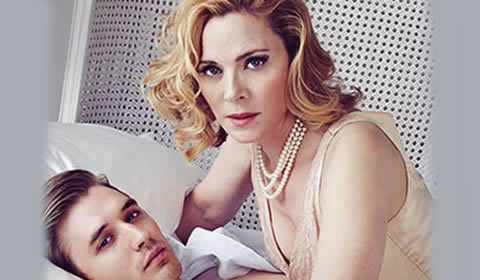 Alexandra Del Lago was once the shining star of Hollywood, but has since fled due to the disastrous premiere of her comeback film. Travelling incognito, she seeks refuge in drink, drugs and the arms of Chance Wayne, an idealistic young dreamer turned gigolo. Determined to achieve his own Hollywood fame, Chance may not be all he seems. Soon, a trip back to his hometown in a bid to win back his childhood sweetheart sets their relationship on a disastrous course in Williams’ haunting portrayal of the destruction of dreams.

Best-known for playing the vivacious Samantha Jones in Sex and the City, Kim Cattrall recently appeared in the Broadway revival of Private Lives and now returns to the West End to play Alexandra opposite Seth Numrich as Chance. Numrich is an acclaimed Broadway actor who most recently starred in Broadway’s celebrated Golden Boy as well as War Horse. Further cast members include Owen Roe as Boss Finlay and Bird Brennan as Aunt Nonnie.

Special notice: Fans of Kim Cattrall will relish the opportunity to see her live on stage, in an equally sassy role. Those who enjoy work by Tennessee Williams will adore this heated revival.

SeatPlan Recommends: Seats across the Old Vic offer good views. Sit as centrally as possible to avoid any restrictions.

Nobody has added a seat view photo for Sweet Bird of Youth at Old Vic Theatre yet, please be the first to share your experience.
Your basket is empty.