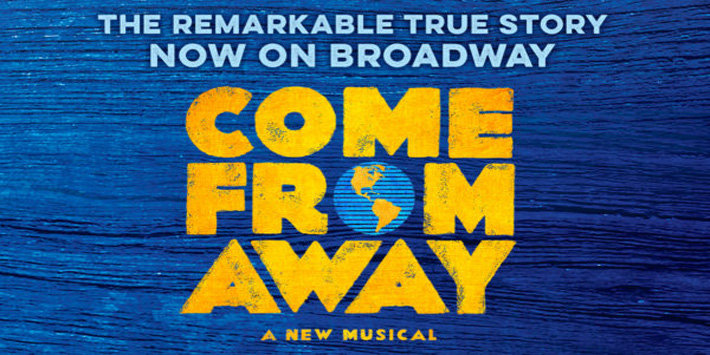 Come From Away tickets

Gerald Schoenfeld Theatre
112 seat views
Multi award-winning Canadian musical Come From Away has received huge critical success on Broadway, and continues to draw fans from across the globe. This uplifting, emotional musical about a huge act of kindness in a small Newfoundland town is based on the true events of 9/11, and is currently playing at the Gerald Schoenfeld Theatre.

A breath-taking new musical, Come From Away takes audiences into the heart of Gander, Newfoundland during the 9/11 attacks. As flights were grounded across the US, 7,000 passengers and crew were stranded in Gander, and residents found their population suddenly doubled in size. Despite hatred and fear spreading in the days following the terrifying attacks, one small town welcomed passengers from all over the world. With a live onstage band and standout songs including “Me and the Sky” and “I Am Here”, Come From Away is an unmissable celebration of humankind at its best.

The show’s book, music and lyrics are by Irene Sankoff and David Hein, the husband and wife duo behind My Mother’s Lesbian Jewish Wiccan Wedding; Come From Away is only their second musical. It is directed by Tony Award-winner Christopher Ashley, whose credits include Memphis, The Rocky Horror Show and Xanadu, with set design by Beowulf Boritt, musical staging by Kelly Devine and sound design by Gareth Owen.

Based on the testimony of real Newfoundlanders and “plane people”, Come From Away at the Gerald Schoenfeld Theatre is a moving true story showing that even in our darkest moments, kindness and friendship can be found.

Come From Away seat view photos show what view you will get for your money. Our users will start adding seat views when the show opens.

Earn double Rewards points by adding your Come From Away seat view photo! Use your points for Theatre Tokens and Encore Tickets vouchers and get money off your next theatre trip.