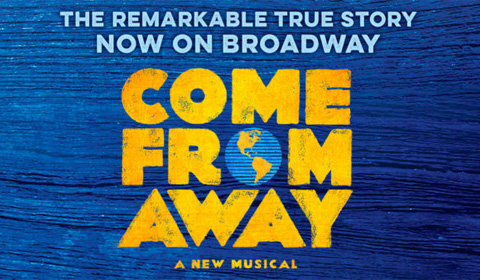 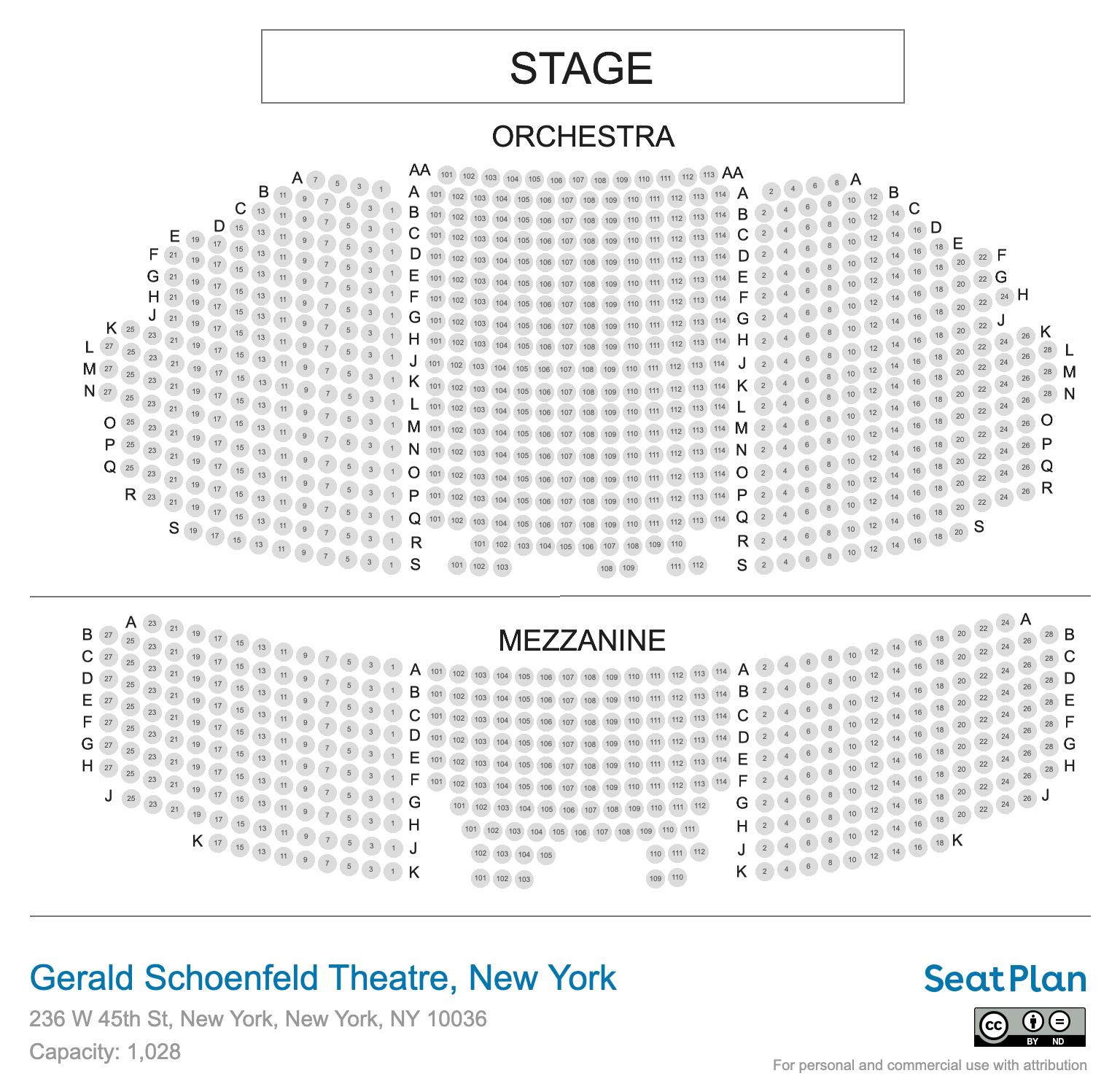 The Gerald Schoenfeld Theatre has a capacity of 1027 seats, including 644 seats in the Orchestra and 383 seats in the Mezzanine. Use our interactive seating chart to view 96 seat reviews and 82 photos of views from seat.

Built in 1917, the Gerald Schoenfeld Theatre was initially christened the Plymouth Theatre. It achieved considerable success with a mixture of musicals and dramas, and in 2005 was given its current name in posthumous tribute to the former chairman of the Shubert Organization.

The venue is another example of the collaboration between the Shubert brothers (who built, owned and operated many Broadway theaters) and architect Herbert J. Krapp. Inside, it is similar to the Booth and Shubert Theatres, with attractive motifs amid a simple white, gold and red color scheme. Its mid-size auditorium is perfect for housing a range of shows.

Notable productions at the theater include Hedda Gabler and A Doll’s House (1918), Noel Coward’s Private Lives (1948) and Equus (1974, starring Anthony Hopkins). Since the turn of the century, a number of famous talents have trodden the boards, including Vanessa Redgrave and Philip Seymour Hoffman in Long Day’s Journey into Night (2003), Patrick Stewart in A Life in the Theatre (2010) and Helen Mirren in The Audience (2015).

With a capacity of 1,084 including 15 standing spaces and Boxes, the Gerald Schoenfeld Theatre seating chart comprises two levels. The Orchestra is the largest and splits into Left, Right and Center. Views are best in the Center Orchestra, although seats beyond row Q are affected by the Mezzanine overhang. Despite being more removed, the Mezzanine has excellent overhead views, especially in rows A-D of the Center section. Seats at the sides and rear can feel more partial and distant, but the vast majority of the Mezzanine offers excellent value for money in this mid-size theater.

• Children under four are not permitted into the theater
• Step-free access from the street to the Orchestra
• The bar is in the basement; queues can get long and drinks are expensive
• Coat check is available at around $2 per item
• Bag check is in operation; leave plenty of time to get to your seats

There are a few options for good value seats which don’t compromise on quality. Rows K-O in the Center Orchestra are unobstructed and detailed, but cheaper than premium, whilst rows E-G in the Center Mezzanine make the most of a great rake for aerial views which cover the entire stage below.

Premium seats in the Gerald Schoenfeld Theatre are in rows C-E of the Center Orchestra, which are intimate but not too close for comfort; and rows A and B of the Center Mezzanine. These seats have excellent overhead views perfect for appreciating the stage in one sweep. They don’t miss out on proximity either: hanging over Orchestra row J, they afford a relatively close view. 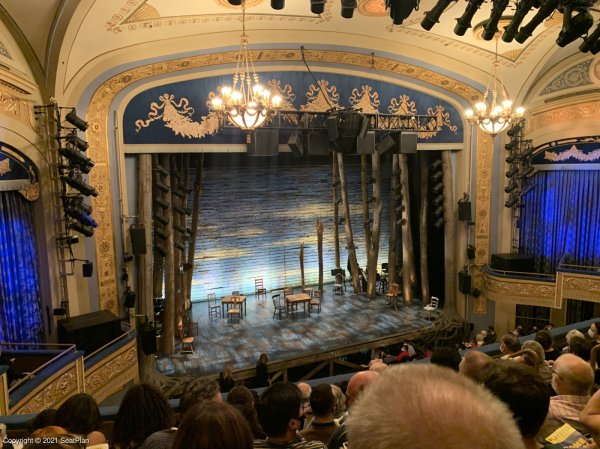 I was so pleasantly surprised by the view from here, it doesn't feel like it's side mezzanine at all, as the mezzanine section isn't that much wider than the stage so we felt pretty centered. It's also close enough to the stage that we were able to catch... More 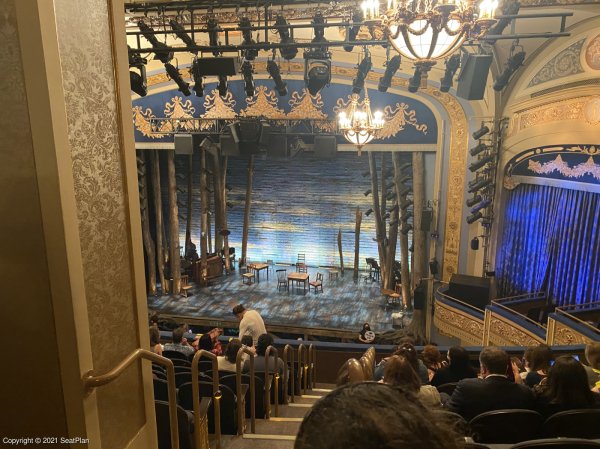 It is an aisle seat so it is very easy to leave quickly, also the seat is next to a small step up so you have plenty of leg room. There is a large column directly in the line of sight of the stage. It doesn't block any of the action for Come From Away... More 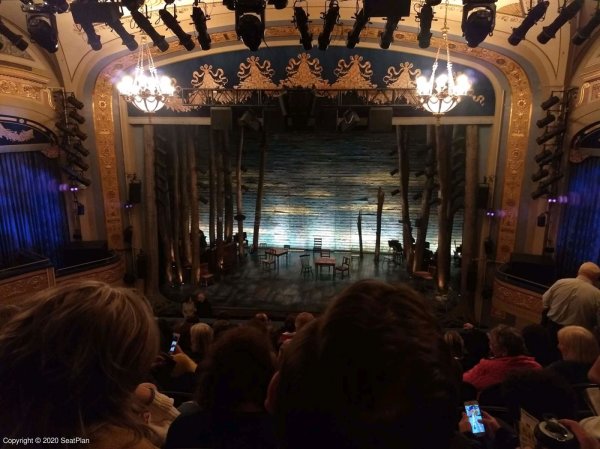 Second to last row of the mezzanine. This is a smaller theatre, so you are still close enough to make out expressions without binoculars. There are zero obstructions and everything on the stage is in view at all times. More