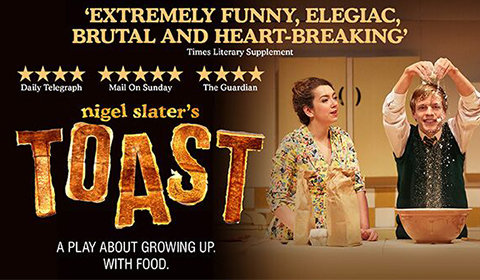 Nigel Slater's Toast is set in 1960s suburban England and follows Slater’s coming-of-age and the food that shaped him. Covering the loss of his mother, a strained relationship with his father, and the discovery of a life-long love of food, this is a charming and poignant play inspired by the power and memory of our favourite (and least-favourite) dishes. Audiences can also expect to enjoy sweet treats along the way as they are invited to sample some tastes from Nigel’s childhood.

Nigel Slater's Toast was met with rave reviews during its run at the 2018 Edinburgh Fringe Festival, whilst Slater himself is a hugely well-regarded culinary expert whose work ranges from columns with The Observer to BBC series Simple Suppers. His autobiography, Toast: The Story of a Boy’s Hunger, won the National Book Award for British Biography of the Year and was adapted for television in 2010.

Giles Cooper (National Theatre: This House, Shakespeare's Globe: The Duchess of Malfi) stars as Nigel. He is joined by Lizzie Muncey (National Theatre: Twelfth Night) as Mum, Stephen Ventura (RSC: The Orphan of Zhao) as Dad, Marie Lawrence as Joan, and Jake Ferretti as Josh.

The play is written by Henry Filloux-Bennett, directed and choreographed by Jonnie Riordan, designed by Libby Watson, and features food direction by James Thompson.

With plenty of bittersweet moments interspersed with humour and delicious home comforts, Nigel Slater's Toast at The Other Palace is a recipe for success. It plays in London from 4 April to 3 August 2019.

Special notice: Fans of Nigel Slater as a food writer and critic will enjoy this charmingly executed peek into his early years.

Sorry this show closed 03 August 2019, we recommend these similar productions.

Nigel Slater's Toast seat view photos show what view you will get for your money. Unfortunately we do not have any seat views for this show.