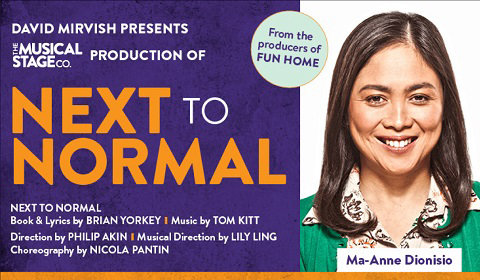 Next to Normal tickets

CAA Theatre
0 seat views
Brian Yorkey and Tom Kitt’s multi-award-winning musical Next to Normal arrives in Toronto, presented by The Musical Stage Company. Playing a limited season at the CAA Theatre, the musical depicts a family attempting to overcome a crisis.

Winner of three Tony Awards, including Best Musical Score, as well as the 2010 Pulitzer Prize for Drama, the show was applauded for expanding the scope of subject matters for musical theatre.

Next to Normal follows Diana Goodman and her family, as they try to get past the traumatising death of her young son. Diana lives with bipolar disorder, which on occasion threatens to tear her family apart. As they collectively attempt to cope with trauma, loss and serious mental health problems, the musical confronts the real meaning of family.

A thrilling, emotional and touching new musical that addresses some of the tougher issues in life, Next to Normal plays at the CAA Theatre from 26 April to 19 May 2019.

Special notice: Fans of new musicals, and those who know and love the Tony Award-winning Next to Normal now have the chance to see it on stage in a thrilling new production.

Next to Normal seat view photos show what view you will get for your money. Unfortunately we do not have any seat views for this show.