SeatPlan members have added 11 view from seat photos to help you find the best seats and book Hamilton tickets and more. Choose your show and date for all photos, seat availability and prices. Help us get a photo from every seat - add your photos. 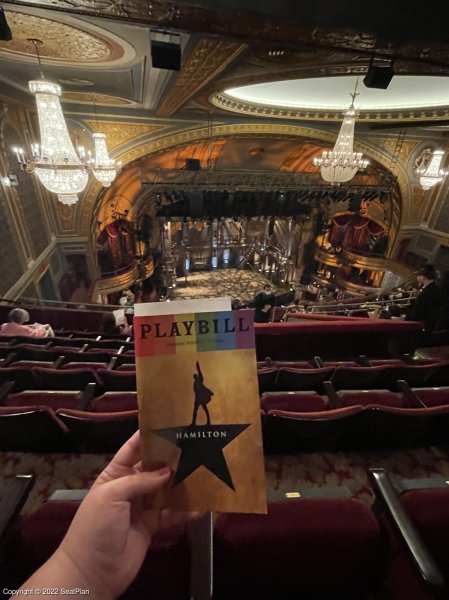 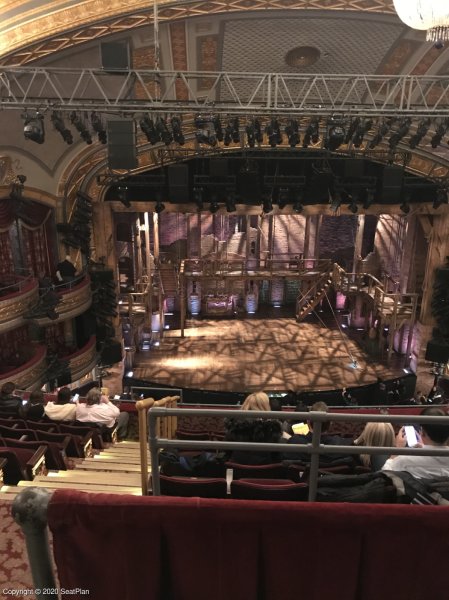 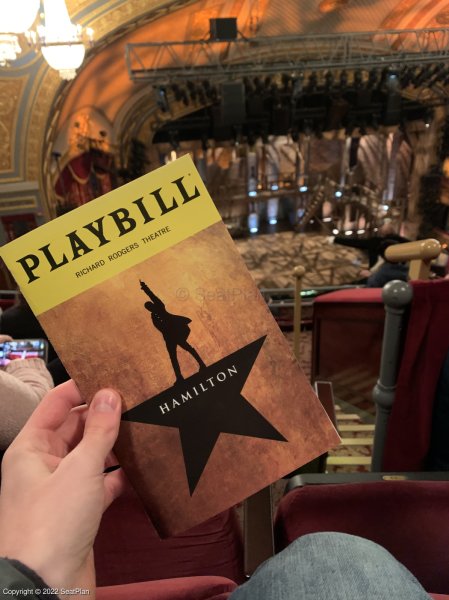 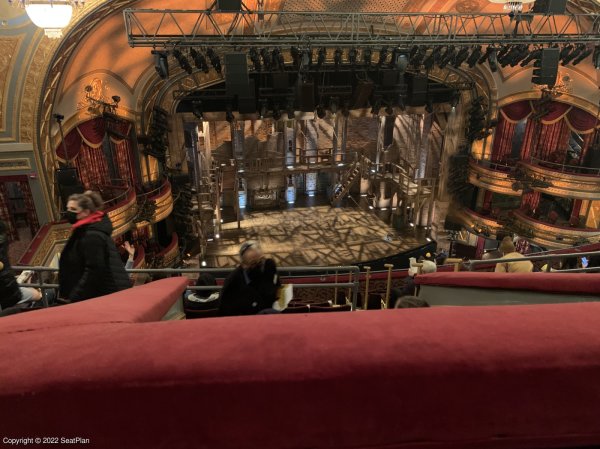 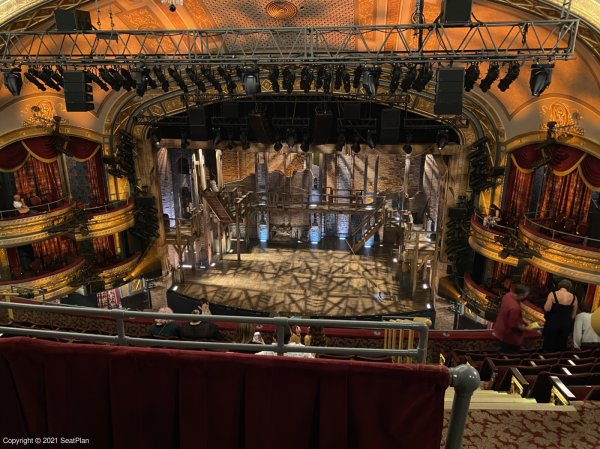 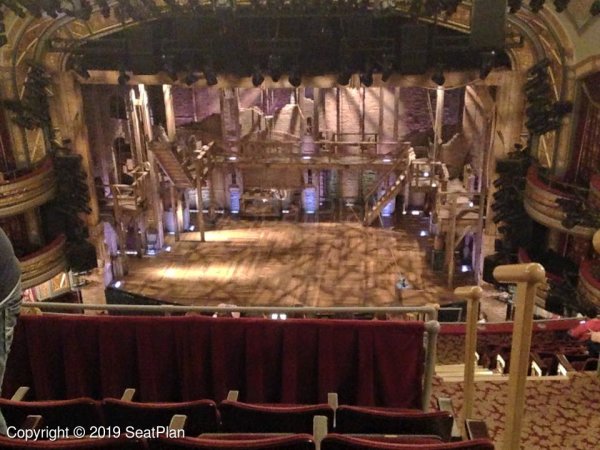 The Rear Mezzanine sits at the very back of the theater, within the same balcony as the Front Mezzanine. Separated by a step up and a curtain rather than a wall, the Rear Mezzanine is further split into Left, Right and Center with aisles in between. The Rear Mezzanine is slightly larger than the Front Mezzanine, with 268 seats across eight rows, A-H. The Rear Mezzanine benefits from a very good rake, although the angle is quite steep and notably cramped, and the stage can feel distant. Despite this, sightlines remain generally clear and patrons sitting in row A can take advantage of the curtain for an impressive amount of extra legroom compared to other front rows in the theater. Like every section, sitting to the sides will result in partial views of the left or right-hand sides of the stage.

The Rear Mezzanine is located up one flight of stairs and does not have any designated accessible seats. Due to the rake and the subsequent steps up to the seating area after entering behind row F, this section may not be suitable for patrons with very limited mobility.

The Left Rear Mezzanine is spread across eight rows. At its longest, seats are placed odd-numbered from 1 on the inside up to 27 on the outside aisle. Rows A, B and C are shorter than those behind, starting mid-way down the row at seat 13. Row H is exceptionally short with just two seats, at the far side. Due to the distance, side-on views are not as obvious as they may be for patrons on ground level, so even spots in the higher range can be considered among the good value seats in Richard Rodgers Theatre Mezzanine.

Notable restrictions to this section include the cramped legroom, which is best offset in row A, where a curtain (or railing) replaces a solid wall in front. The decent rake prevents any immediate obstructions, although patrons in row A may lean forward and slightly block parts of the stage for guests sitting further back. Safety features such as railing and handrails are obvious, but tend not to restrict the stage itself.

Like the Left Rear Mezzanine, this section curves slightly towards the stage and sits across eight rows. Seats are even-numbered between 2 and 28; row H has two seats at the far end, and rows A, B and C start midway at seat 14. The division between the Front and Rear Mezzanine is a curtain rather than a wall, so tall patrons can take advantage of the gap for extra legroom. This section feels distant from the stage, but the steep rake and decent angles mean patrons can still enjoy a sweeping view of performances. The light fixtures above and safety railings in front and to the side will be in sightlines, but shouldn’t block the stage itself; this is more likely to be caused by patrons in rows A or B leaning forward to improve their own view.

Like the rest of the Rear Mezzanine, seats here are the cheapest in the Richard Rodgers Theatre, with prices decreasing towards the back and sides.

The Center Rear Mezzanine is the best area of this section, with seats facing head-on (if very far above) the stage. Seats start at 101 on the right and run up to 114 on the left, with the best sightlines in row A. Patrons can once again use the curtain directly in front of this row for extra legroom, and aisle seats are also a good choice to avoid feeling uncomfortable.

The main downside to this section is that the steep rake and distance from the stage might feel too far for some patrons. However, sightlines down to the stage itself remain impressively clear even from the back row, so the section can be considered good value for anyone wanting to enjoy Broadway on a budget.

SeatPlan’s best views of the stage

Row A of the Center Rear Mezzanine provides unobstructed, if distant, views of the stage below. Patrons can see the Boxes and other seating around them, but this doesn’t interfere with sightlines to the stage itself.

The Rear Mezzanine is separated from the Front Mezzanine by a curtain rather than a solid wall, which makes it perfect for tall patrons needing extra legroom. It offers some of the best legroom in the theater.

• Row A has excellent legroom thanks to a curtain in front
• Sit on an aisle seat for quicker access to the restrooms
• The best seats are in the Center Rear Mezzanine, row A
• The section feels distant, but views are usually clear down to the stage
• Patrons sitting in rows A and B may lean forward into others’ sightlines

The Rear Mezzanine is the cheapest section on the Richard Rodgers Theatre seating chart, with prices at their lowest towards the outer sides of the Left and Right areas, and the back rows.

A bar is located on the Mezzanine level of the theater, selling alcoholic and non-alcoholic beverages. Drinks can be taken back to seats if they have secure tops or lids.

Restrooms are on the ground floor, and are used by patrons sitting on all levels in the Richard Rodgers Theatre. This means queues will get very long, very quickly during the intermission.