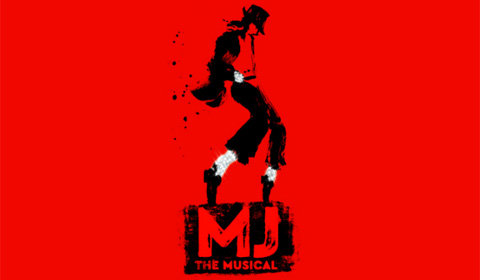 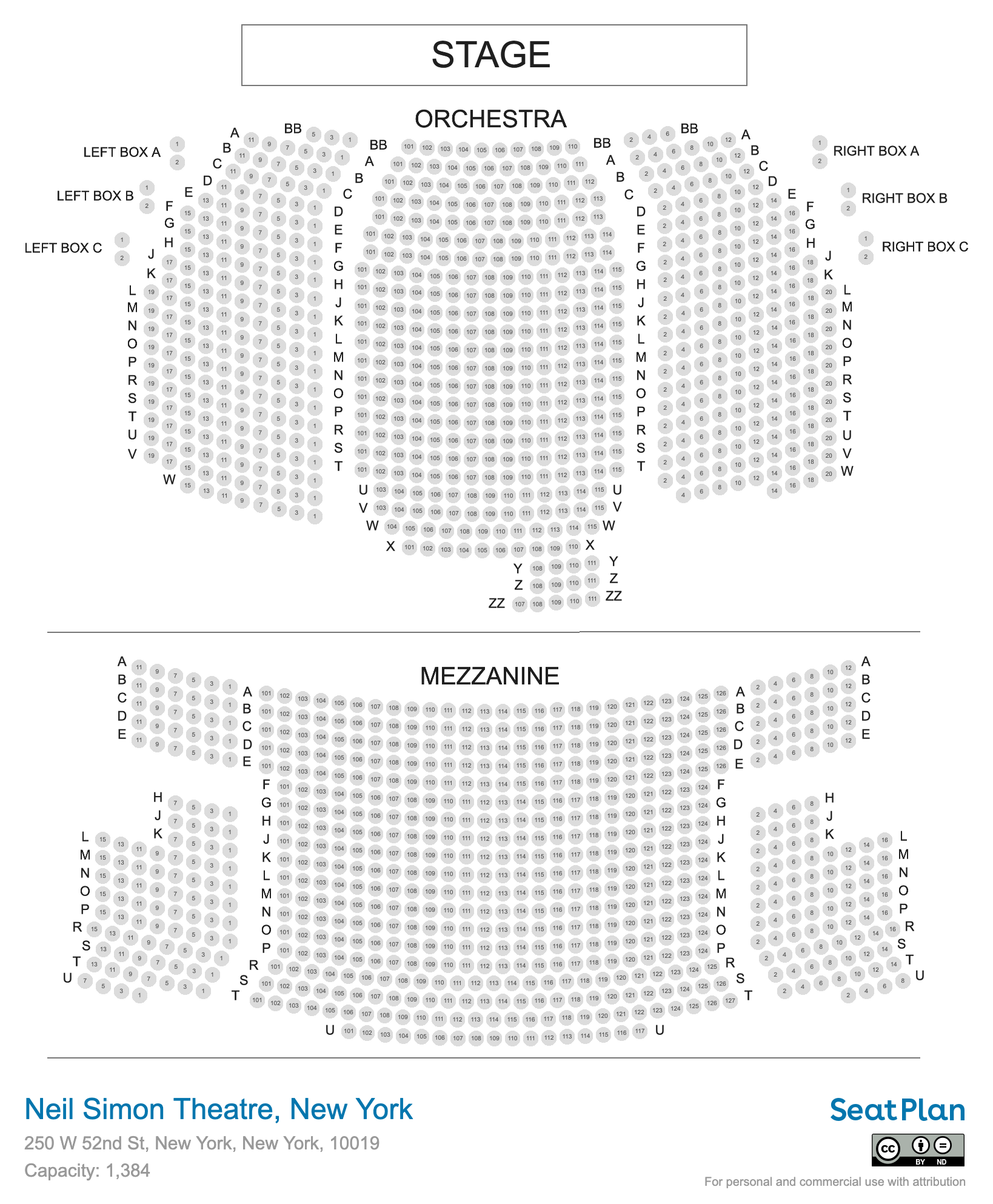 The Neil Simon Theatre has a capacity of 1372 seats. Section capacities are 691 Orchestra and 681 Mezzanine. Use our interactive seating chart to view 110 seat reviews and 93 photos of views from seat.

Built in 1927 as the Alvin Theatre, the Neil Simon Theatre was renamed in 1983 after the Pulitzer-winning American playwright behind Sweet Charity. Alongside some of Simon’s own plays, the theater has been home to a number of hit musicals and ground-breaking dramas. With a red-brick exterior decorated by three white, arched windows, the Neil Simon Theatre looks clean and classic both inside and out. Its main feature is its deep auditorium, with rows extending back to Z in the Orchestra.

Plenty of hits have been celebrated at the Neil Simon Theatre, including Broadway favorites Company (1970) which was nominated for 14 Tony Awards in 1971, and Hairspray (2002-2009). In recent years the theater has enjoyed plenty of sold-out shows as locals and tourists flocked to see limited engagements of Jesus Christ Superstar (2012), Big Fish (2013) and Angels in America (2018).

The Neil Simon Theatre has a capacity of around 1,445, with the majority of seats divided between the ground-floor Orchestra and the elevated Mezzanine. Both are split into Left, Right and Center sections, with views best in directly-aligned center seats. Sightlines towards the sides tend to become more partial, and the rear of the deep Orchestra is affected by the Mezzanine overhang. Despite some architectural obstructions and distant sightlines at the back of the theater, there are very good deals to be found in the middle and back rows of both sections. Patrons can also find angled Box seating at a higher price.

• Children under four are not permitted inside the theater
• This theater has no cloakroom; leave large bags and luggage at the hotel
• Step-free access from the street to accessible seating
• Bars are in the Lower Lounge and Mezzanine; covered drinks can be taken to seats

The Neil Simon Theatre has a couple of areas which are good value. In the Center Orchestra, rows E-M are cheaper than premium and avoid the Mezzanine overhang behind. Seats on the inside aisle of the Left and Right Orchestra are also cheaper, but remain fairly head-on to the stage. For theatergoers on a budget, rows F-M in the Center Mezzanine offer distant but comprehensive views for a lower price.

Premium seats in the Neil Simon Theatre are in rows A-D of the Center Orchestra, where patrons are immersed in the action and details of a show. Rows A and B in the Center Mezzanine are also expensive, and are often popular thanks to their elevated sightlines. Sitting in these rows guarantees a full sweep of the stage, perfect for appreciating a bright and busy musical number. 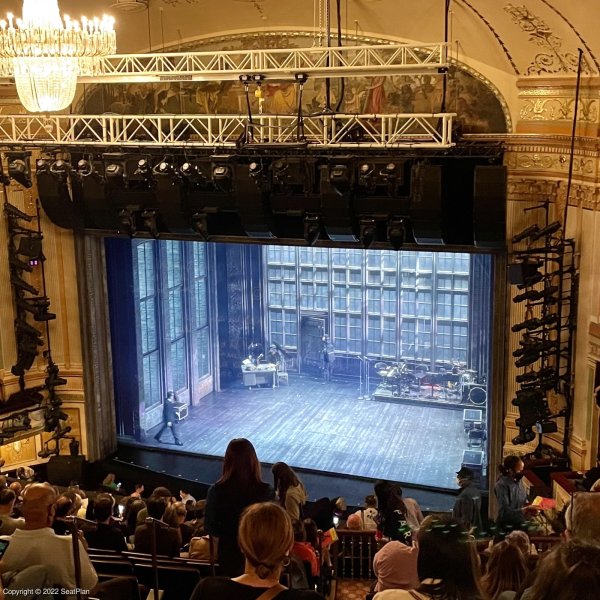 Considering the seat is is the 2nd to last row, the view is actually pretty good. You can see the whole stage and don't have to sit forward to see anything downstage. There is no obstructed view. It is just a bit far. The seat cushions feel new, they... More 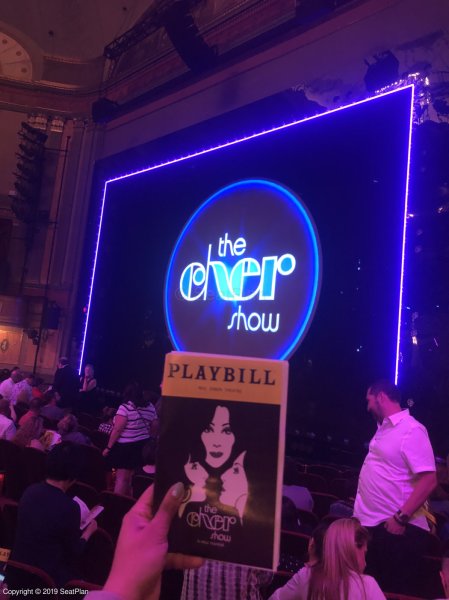 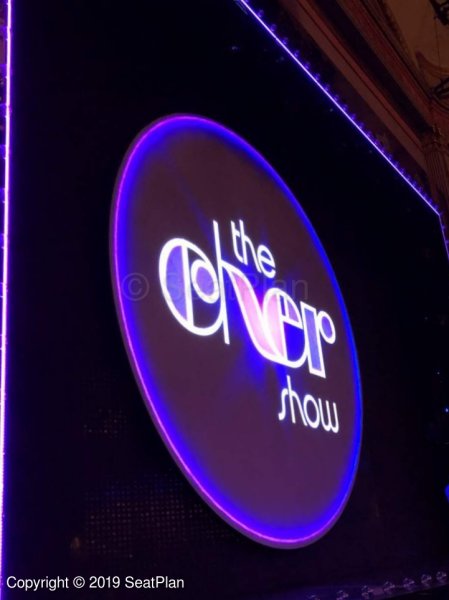 Seat comfortable and good legroom since first row with no one in front of you. Had to look up and to the side which was a little uncomfortable. Could not see a lot of the left side of stage but the performers come right over and walk around the stage... More