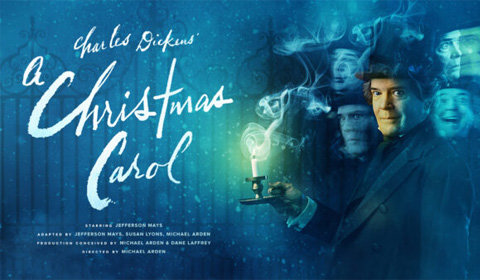 The Nederlander Theatre has a capacity of 1182 seats. Section capacities are 585 Orchestra and 597 Mezzanine. Use our interactive seating chart to view 137 seat reviews and 125 photos of views from seat.

The Nederlander Theatre first opened in 1921, then named National Theatre. Like many Broadway venues, it been rechristened a handful of times, but since 1980 has been named after the founder of the Nederlander Organization, David Nederlander. It is perhaps best known today as the home of runaway hit musical Rent.

Standing as the lone theater on West 41st Street, the Nederlander is slightly removed from the main bustle of 44th and 45th streets, where Broadway venues including the Al Hirschfeld Theatre and Imperial Theatre dominate. The Nederlander was renovated in 2008 to improve facilities and despite its slightly dated look, its rough charm made it the perfect match for Rent, which remains its longest-running show.

Before Rent took to the Nederlander’s stage between 1996 and 2008, the theater was already hugely successful, with playwrights including Noel Coward (Private Lives, 1969) and Harold Pinter (Betrayal, 1980) receiving Broadway premiers and revivals on its stage. Post-Rent, its highlights include Newsies (2012 – 2014) and War Paint (2017) starring Patti LuPone.

There are around 1,200 seats in the Nederlander Theatre, spread across the Orchestra and Mezzanine above. The two sections are similar in size and shape, with each divided into Left, Right and Center blocks of seating. Views are best from the front and center of either section, and the Mezzanine also makes the most of a steep rake to keep sightlines clean but distant in the back rows. In the Orchestra, seats vary towards the rear, with the Mezzanine overhang and comparatively shallow rake affecting views of the stage. In both sections, patrons sitting in the far rows and corners will experience more angled views than the rest of the seating chart. Prices start high in front rows, with good value cheap seats at the back of the Mezzanine.

• Step-free from the street into accessible seating
• There is no cloakroom at the theater; bring small bags where possible
• Bag searches may be in operation; leave plenty of time to reach your seats
• Children under four are not permitted into the theater 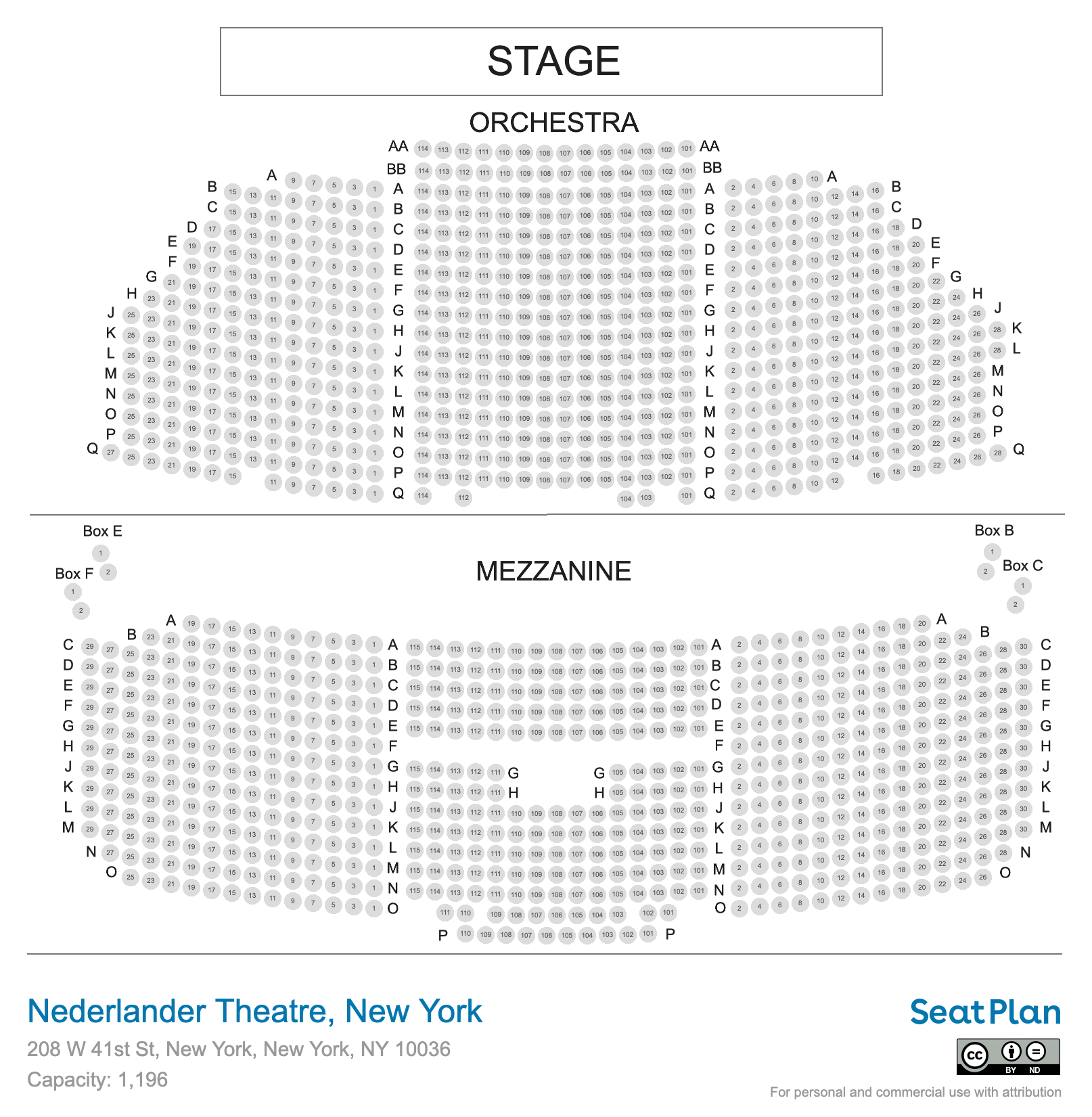 Rows L to O in the Center Orchestra are slightly cheaper than premium, and remain unaffected by the Mezzanine overhang further back. The middle and back rows of the Mezzanine are good value seats for anyone on a stricter budget, with an excellent rake ensuring views are clear – but be aware these seats are very tight on legroom.

The best seats in the Nederlander Theatre are towards the front of the Center Orchestra and Center Mezzanine. In particular, rows B and C in both are perfect for avoiding any structural features cutting into sightlines. The first few rows of the Center Mezzanine are also desirable for anyone who likes to take in the entire stage in one sweep. 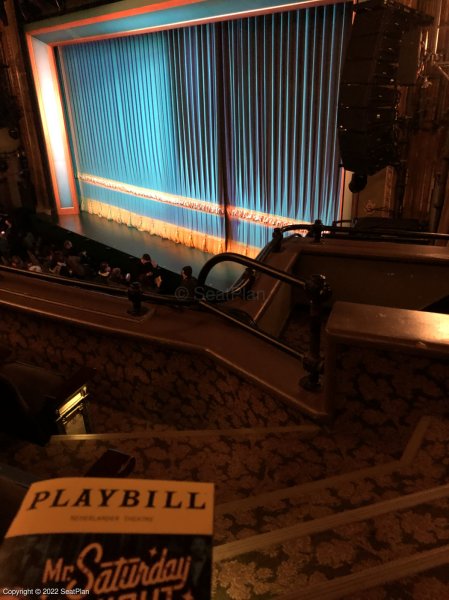 Aisle seat without a seat in front of you so plenty of legroom. Did not miss anything with this side view. There’s a stairway steps away behind the right box which allows for the fastest exit to the street. More 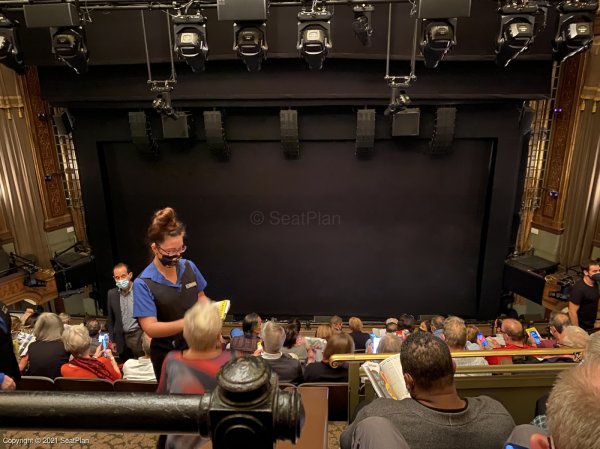 This particular seat has mixed legroom; there is more for the right foot than the left foot. The reason being is that this seat is to the immediate right of a ledge in the mezzanine. So the comfort and legroom leave much to be desired. However, the view... More 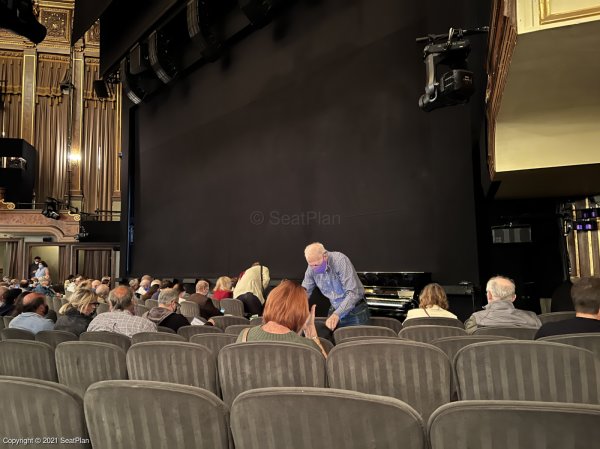 The seats at the Nederlander don’t offer a lot of elbow room and are a little tight, but there’s worse. The view is pretty far over so you may miss certain things. For The Lehman trilogy it wasn’t a big issue. More