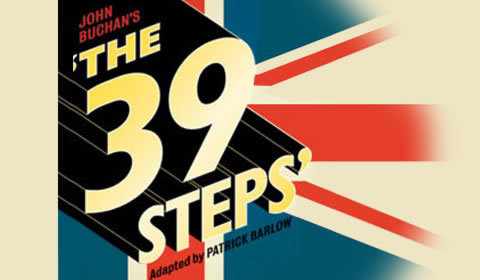 Criterion Theatre
27 seat views
The 39 Steps is a much loved show that has been adapted from the 1915 novella by John Buchan and the 1935 Hitchcock film of the same name.

Set in the 1930’s, The 39 Steps follows Richard Hannay as he gets tangled up in the dangerous world of espionage. Hannay’s night out at the theatre ends abruptly when shots are fired, leading him to a chaotic turn of events in which he returns to his flat with an attractive young woman who tells him she needs to prevent a group of spies (named “The 39 Steps”) from stealing top secret information.

After the woman is hunted by the spies, Hannay too becomes a target and he flees to the Scottish Highlands following her instruction. This leads to a whimsical romp across the country and back again, providing much amusement for the audience! For the Hitchcock fans out there, the shows makes reference to some of his other works such as North by Northwest, Vertigo, Psycho and Strangers on a Train.

Having premiered in Yorkshire with a budget of just £1000, there is a delightful simplicity and makeshift feel to this production, which heightens the sense of play among the actors. For instance, the set is simplistic and objects are often creatively used to portray more complex scenes. Four actors take on over 20 different roles cross the text, meaning they are experts at physical performance. Chaos and hilarity often ensues!

The 39 Steps was adapted for the stage by Simon Corble, Patrick Barlow and Nobby Dimon and is directed by Fiona Buffini.

Special notice: Fans of the murder mystery genre will love this production! The 39 Steps is a bit like The Mousetrap but with more laughs – if you like that then you will enjoy this production.

Sorry this show closed 05 September 2015, we recommend these similar productions.

SeatPlan Recommends: Fans of the murder mystery genre will love this production! The 39 Steps is a bit like The Mousetrap but with more laughs – if you like that then you will enjoy this production.