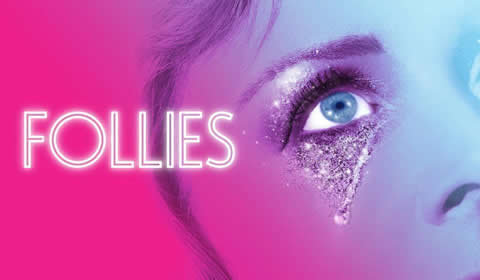 National Theatre - Olivier
192 seat views
After sold-out success in 2018, Dominic Cooke’s thrilling revival of Follies returns to the National Theatre for another spellbinding run. Swiping the 2018 Olivier Award for Best Musical Revival, the production received five stars and garnered huge acclaim from audiences and critics alike. Originally premiering in 1971, Stephen Sondheim’s essential musical won 7 Tony Awards and has been regularly revived around the world since.

Follies is the sensational story of a group of women reminiscing about their days as Follies’ girls. Set within a decaying Broadway theatre scheduled for demolition, the former performers of the theatre’s musical revue gather for a final reunion on the stage. Nostalgic for their past selves and unhappy with their present lives, the women think of the good old days of show business. Love, regret and aging are all featured themes in this definitive production of a stunning musical.

Dominic Cooke returns to direct the production. An Artistic Associate of the National Theatre and former Artistic Director of the Royal Court, he has numerous directing credits, including Ma Rainey’s Black Bottom, By the Bog of Cats, The Hollow Crown and The Crucible. Further creatives include designer Vicki Mortimer, choreographer Bill Deamer, lighting designer Paule Constable and sound designer Paul Groothius.

Janie Dee, Peter Forbes and Tracie Bennett reprise their roles as Phyllis, Buddy and Carlotta. They are joined by Alexander Hanson and Joanna Riding as Ben and Sally, and are accompanied by a cast of 36 other performers and a 21-piece orchestra.

Cooke’s production of Follies received five-stars London’s leading publications, and is a timeless tale of unrequited love, maturing and the glossy nature of show business. Featuring songs such as “Losing My Mind” and “I’m Still Here”, the highly-anticipated revival of Follies plays at the National’s Olivier Theatre from 14 February 2019.

Special notice: Those who missed the musical in its first run now have the chance to catch it again! Anyone who loves a good nostalgia-fest, Sondheim fans and those who just love excellent musical theatre will want to beg, borrow or steal to get a ticket to this essential show.

Sorry this show closed 11 May 2019, we recommend these similar productions.

Follies seat view photos show what view you will get for your money. Unfortunately we do not have any seat views for this show.

Just super! Words cannot describe how good this show is! It is 2hrs and 15 min straight through but it... More

Just super! Words cannot describe how good this show is! It is 2hrs and 15 min straight through but it is worth it (just don't drink too much coke prior!) The set was fantastic how it changed and revolved round and the singing and choreography was insane! Wish I could see this show again!

Excellent show with an amazing cast including Janie Dee, Joanna Riding, Tracie Bennett and Claire Moore. The show revolves around the past lives of several now retired Follies Girls. Throughout, their past selves observe like so many ghosts. The direction and set design were superb - with the huge set moving and changing shape almost without notice.

And absolute corker of a production with a stellar cast (both new and old), lovely orchestration and,... More

And absolute corker of a production with a stellar cast (both new and old), lovely orchestration and, of course, the incredible music, lyrics and book of Stephen Sondheim and James Goldman. An absolute must-see for anybody desiring a fine piece of theatre - impeccable choreography (especially in the brilliant ‘Mirror Number’), lovely voices and a wistfully gripping story to boot. I cannot say it enough - GO SEE THIS SHOW!

Easily the best show I've seen in London since I've lived here. It's a masterpiece and cannot be faulted.... More

Easily the best show I've seen in London since I've lived here. It's a masterpiece and cannot be faulted. Everything is beautifully done and performed. Stunning.

One of the best musicals I have ever had the pleasure to see. A fantastic company with no weak link.... More

One of the best musicals I have ever had the pleasure to see. A fantastic company with no weak link. Excellent staging. If only every production had that kind of thought, love and care crafted into it, we would all surely be spoilt even more than we are already on the London stage.

FOLLIES at the National Theatre When I first saw Dominic Cooke’s revival of Follies at the National Theatre in September 2017, I was overwhelmed by its beauty, heart and capacity for happiness. Returning to the production on its final matinee in the West End, I’m reminded of the show’s darkness, sorrow and hopelessness. I’m so glad I came. Sondheim’s Follies is a much cherished show of which a perfect production is difficult to achieve, and each has been debated at length down to minor details, including extensive discussion as to the colour Sally’s dress ought to be so as not to detract from Phyllis’ often red outfit later in the show. Cooke’s production not only side-steps potential pot holes and challenges presented by the script, it presents a stronger narrative and structure for some clever changes: the show is intensified and heightened by running without an unnecessary interval, the returning Follies girls are allowed to talk about their lives through the guise of an interview and the ghosts of their past selves stalk the crumbling set with a haunting dignity, the huge Olivier stage never feels empty, nor does the forty-strong cast feel like a lost crowd, the details are precise and exquisite. Prior to its return to the National Theatre, this production was already glorious, from its design, perfectly capturing the spirit of the famous image of Gloria Swanson amidst the crumbling ruins of the Roxy Theatre which inspired Sondheim to write Follies, to its staging, flooding the stage with memories of the past that bubble with tension until they reach a boiling point, creating theatrical magic in the Loveland sequence. Of course, any production of this beloved show sinks or swims by its casting, and the central four performances are played together wonderfully by the talented cast assembled here. Janie Dee recreates her stunning portrayal of Phyllis; icy and sharp, she is Dynasty mixed with Desperate Housewives and commands the audience to worship her. While her ‘Could I Leave You’ is a still and purposeful, with a simmering intensity, in ‘The Story of Lucy and Jessie’ she is an explosion of fiery passion (sans red dress) and wows with her jazzy vocals and full out choreography. Peter Forbes returns to play Buddy with sincerity, warmth and frustration, grasping the character’s emotional conflict even better than in his first, excellent performance. New to the cast are Joanna Riding as Sally and Alexander Hanson as Ben. Hanson was a saving grace of a bizarre concert production of this show at the Royal Albert Hall in 2015 and is even better here. Though his Ben takes some time to ignite, he is believably charismatic, regretful and fundamentally flawed. Opposite him, Riding takes an entirely different approach to Sally Durant Plummer than her predecessor in the role, Imelda Staunton, playing a far more brazen, desperate and unhinged Sally, vying unapologetically for the affections of her beloved and with little remorse for either of their spouses. Riding breaks with convention here completely, exhibiting little shyness or inhibition in her Sally and turning on its head completely the famous torch-song, ‘Losing my Mind’, in which her anguish is agonising and her performance is triumphant. Riding’s casting also means the modulation that was added to lower the ending of ‘Too Many Mornings’ has thankfully been removed. Effortless soprano ensues. The supporting cast hardly disappoint either. Tracie Bennett’s ‘I’m Still Here’ is anticipated as the showstopper that it is as she brings her signature firecracker energy to it, pounding the air of the Olivier auditorium with her tiny, determined fists. Dawn Hope also deserves a mention for leading ‘Who’s that Woman’, one of Sondheim’s rare traditional musical theatre ‘numbers’, with gusto aplenty, drawing applause from the audience I started to think might never end.