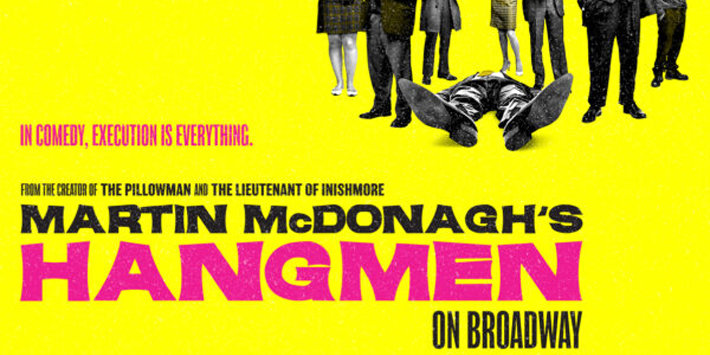 Wyndham's Theatre
21 seat views
Critically acclaimed playwright Martin McDonagh explores the nature of violence in his darkly comic exploration of the abolition of hanging in Hangmen. Following a hugely successful first run at the Royal Court, this atmospheric and electrifying play arrives on the stage of the Wyndham’s Theatre in winter 2015.
Hangmen immerses audiences in the atmosphere of another age, in which discrimination abounds and violence is lurking just below the surface. Harry used to be the second-best hangman in England, and the regulars at his pub in Oldham are clamouring to hear his reaction to the news that his former trade is no longer legal. In the midst of the excitement, Harry notices a visitor from London who has a mysterious motive for turning up at the pub unannounced.
McDonagh was awarded the Critics Circle Theatre Award for Most Promising Playwright in 1996, and Hangmen is the latest in a long line of his critically acclaimed works. Most recently, Daniel Radcliffe starred in the sold-out revival of The Cripple of Inishmaan which later transferred to Broadway. His other works for the stage include The Beauty Queen of Leenane, The Lieutenant of Inishmore and The Pillowman. Equally successful with his work in film, McDonagh was awarded the Academy Award for Best Live Action Short Film for Six Shooter, as well as multiple award wins and nominations for the black comedy In Bruges.
David Morrissey and Johnny Flynn reprise their leading roles for the transfer to the Wyndham’s Theatre. Morrissey’s prolific acting career includes countless roles with the Royal Shakespeare Company and the National Theatre as well as roles in Captain Corelli’s Mandolin, The Other Boleyn Girl and Nowhere Boy. Flynn is a musician, composer and actor whose previous work includes Jerusalem opposite Mark Rylance at the Royal Court and roles with Propeller’s all-male Shakespeare troupe.

Special notice: Fans of well-crafted, complex theatre will love McDonagh’s work – if you have seen any of his other plays you will not want to miss this one! This play has been hailed as the new Jerusalem so is set to be a modern classic.

Sorry this show closed 05 March 2016, we recommend these similar productions.

SeatPlan Recommends: Sections at the Wyndham’s theatre are quite shallow and steeply raked, so you shouldn’t have a problem seeing the dramatic detail of Hangmen even if you find yourself toward the back of the theatre. Stalls seats will guarantee that you are swept away in the atmosphere of the play.