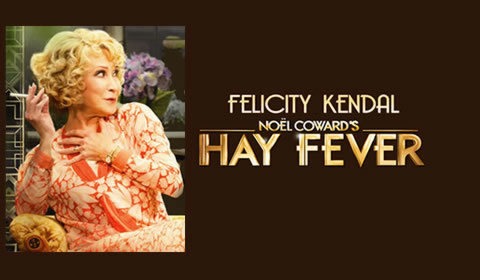 Duke of York's Theatre
7 seat views
Transferring from the Theatre Royal Bath to the Duke of York’s Theatre London, Hay Fever is the well-loved and widely performed play that remains relevant to this day. Written in the 1920s, this comedy of manners is a highly amusing addition to the summer!

Set on a lovely summer’s afternoon in the bohemian Bliss household, it transpires that each family member has invited a guest over without consulting one another. Chaos quickly ensues as they are unprepared for the number of guests attending and often try and outdo one another to be the most entertaining host.

Over the course of three acts, the Bliss family seem to manage to bombard their guests with activities and conversation who are lukewarm to their advances. Judith is the most ridiculous of them all, making wild exaggerations and exclamations and even performs an overdramatic faint. Will the poor guests be able to escape this family of lunatics with their dignity intact?

Lindsay Posner directs this hilarious production of Hay Fever, which includes designs by Peter Mckintosh, sound by Fergus O’Hare, composition by Michael Bruce and lighting by Paul Pyant. Hay Fever opens in May 2015 and will play until August.

Special notice: Those who love a good farce will love this show, especially fans of shows such as Jeeves and Wooster and Relatively Speaking.

Sorry this show closed 01 August 2015, we recommend these similar productions.

SeatPlan Recommends: The Duke of York’s Theatre has a few tricky viewing angles and quite a drastic stage overhang. Avoid the last three rows of the Stalls and try to stick to the middle of each seating section rather than the end aisle seats, which offer a dramatic side view.