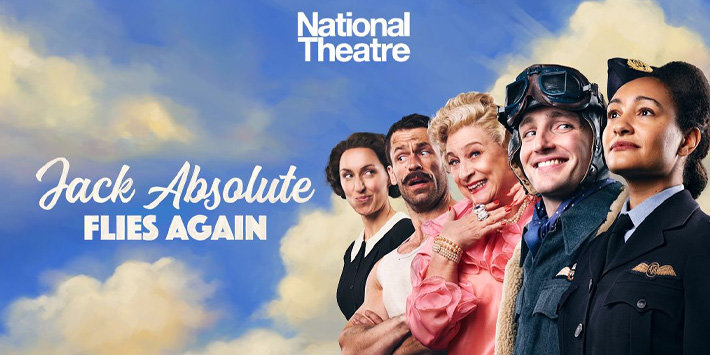 A high-spirited new comedy is filling the South Bank with good old-fashioned fun this year, as Jack Absolute Flies Again plays at the National Theatre.

In July 1940, Pilot Officer Jack Absolute returns to British soil and wants to win the heart of his old sweetheart, heiress Lydia Languish. His attempts soon descend into anarchy however, when Lydia lays out her very particular demands for a relationship.

Based on Sheridan’s The Rivals, Jack Absolute Flies Again is co-written by Richard Bean and Oliver Chris. Bean is best known for One Man, Two Guvnors, which is still considered one of the funniest plays to ever grace the National Theatre stage. This joyously entertaining new play from Bean and Chris is directed by Emily Burns (The Comeback).

Sorry this show closed 03 September 2022, we recommend these similar productions.

Jack Absolute Flies Again seat view photos show what view you will get for your money. Unfortunately we do not have any seat views for this show.

Too many fabulous performances to name them all – this is an excellent cast. But special mention to the... More

Too many fabulous performances to name them all – this is an excellent cast. But special mention to the maid Lucy (Kerry Howard) – utterly outstanding. Direct conversations with the audience, using “dramatic device” and I love theatre – she is sensational – the tone and timing are just perfection.

Based on the 1775 farce “The Rivals” by Richard Brinsley Sheridan the backdrop for this show is WWII’s... More

Based on the 1775 farce “The Rivals” by Richard Brinsley Sheridan the backdrop for this show is WWII’s Battle of Britain in 1940. The play is based at Mrs Malaprop’s stately home, which has become the base for RAF personnel, where several fighter pilots have returned from a successful dogfight. The protagonist of the play, Jack Absolute, wants to woo the woman of his dreams, fellow pilot Lydia Languish. However, as this is a comedy, things do not always run smoothly. Lydia only has eyes for Northern grease monkey Dudley Scunthorpe, the aircraft mechanic, who in turn only has eyes for Lucy, Mrs Malaprop’s maid. It is slapstick. It is farcical. But it’s Great Britain at its hilarious best. The entire show was full of humorous double entendres, and comic stereotypes. (If you love 70s and 80s British comedy, you will thoroughly enjoy this). If you were to put Dad’s Army, It Ain’t Half Hot Mum and ‘Allo ‘Allo into a pot, but throw in a little Are You Being Served? you will have a fair idea what comedic flavour Jack Absolute Flies Again will deliver you. Special mention has to go to the characters of Lucy and Mrs Malaprop, both often broke the fourth wall by acknowledging and talking to the audience. Lucy really played up to the comical “never trust a maid with a letter”; Mrs Malaprop, however, lived up to her name with a string of malapropisms throughout her dialogues, often with smutty consequences. (Roy Faulkland, Bob Acres and Brian Coventry are the bumbling but lovable characters that you can’t help but take to your heart). The staging is highly effective, with most of the action taking place on the vast lawn outside the stately home. There are times when the doors of the house, and the temporary barracks, will open and the inside rooms will move to front of stage.

Caroline Quentin is so much fun to watch, she is obviously having a ball. In fact all the cast look like... More

Caroline Quentin is so much fun to watch, she is obviously having a ball. In fact all the cast look like they are really enjoying themselves. Having Caroline do the splits right in front of you is precious!

This is a laugh out loud funny show. Written by the Two Guvnors people, this is the British laughing... More

This is a laugh out loud funny show. Written by the Two Guvnors people, this is the British laughing at themselves both in the past (set in WW2) and now. Very cleverly written, takes you from laughs to tears in seconds.

5* performance of Jack Absolute flies again! Funny, brilliantly written, innuendos a plenty, cast were so talented. If you want a night out that’ll have you belly laughing and your cheeks hurting from laughing, this is the show for you!

Although some critics don’t like the play I thought it was just like an old fashioned farce and loved... More

Although some critics don’t like the play I thought it was just like an old fashioned farce and loved it. The cast talk to the audience, so the evening I went Mrs Malaprop (Caroline Quentin) mentions the train strike that day.