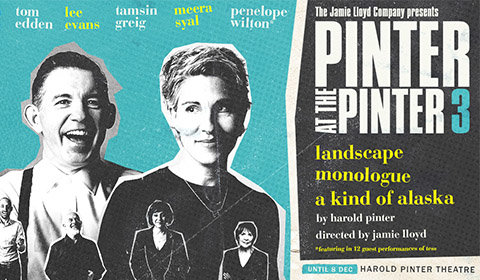 Landscape / A Kind of Alaska tickets

Harold Pinter Theatre
22 seat views
Ten years ago, legendary playwright Harold Pinter passed away, leaving an unparalleled legacy of theatre behind him. To commemorate his death, The Jamie Lloyd Company is producing a five-month-long season of Pinter’s finest one-act plays in a series of double bills at the Harold Pinter Theatre. This unique season runs from September 2018 to February 2019.

Directed by Jamie Lloyd, Landscape / A Kind of Alaska are a double-bill of compelling works that share themes of loneliness and isolation. Landscape focuses on communication issues between a couple, Beth and Duff. With different views on their relationship, this slightly odd short play follows this couple who clearly are not listening to each other.

A Kind of Alaska depicts Deborah, a woman who has just awaken from a 29-year-long sleep. Having been asleep since she was 16 years old, Deborah must come to terms with her ageing and the change that has occurred in the world since then.

Tamsin Greig stars in this double bill, after appearing as the cross-gendered Malvolia in Twelfth Night at the National Theatre and taking over a role last-minute in James Graham’s Labour of Love at the Noel Coward Theatre. Greig is also well-known for her television roles in Episodes, Friday Night Dinner and Black Books. Casting also includes Keith Allen (Kingsman: The Golden Circle, Marcella), comedian Lee Evans, (The Producers, Endgame) and Meera Syal (Annie, Romeo and Juliet).

A fantastic opportunity to catch two rarely-produced plays by one of Britain’s most renowned modern playwrights, Landscape / A Kind of Alaska are a thrilling duo of plays that explore ever-growing themes of loneliness and time. The production runs at London’s Harold Pinter Theatre from 25 October to 8 December 2018, with a press night on 15 November 2018.

Special notice: British theatre fans, those who like Pinter and audiences looking for unique theatrical experiences won’t want to pass over tickets to this anniversary season.

Landscape / A Kind of Alaska seat view photos show what view you will get for your money. Unfortunately we do not have any seat views for this show.

There are some impressive performances here from Tamsin Greig, Meera Syal, Lee Evans and Keith Allen. These short plays and monologues are very amusing and kept the audience entertained. We were treated to an extra monologue at the start of the production by Penelope Wilton which was an added bonus. Exemplary acting from all!

Great performances all round here for some dark but funny Pinter.

I'm sure the acting was fine, but it was difficult to tell because the material was so ridiculously boring.... More

I'm sure the acting was fine, but it was difficult to tell because the material was so ridiculously boring. I usually have no difficulty with heavy texts, but I definitely slept through a few particularly slow sections. This show made me hesitant to book tickets based on big names alone ever again.

Well now, as has happened before, there turned out to be more plays in this than were advertised. I bought... More

Well now, as has happened before, there turned out to be more plays in this than were advertised. I bought a program at the interval, to be able to keep up with them. The stage was revolving gently before the show started, actors gradually sneaking onto it and taking their places. And first up, we were surprised to see Penelope Wilton.. turns out she's doing 12 performances in this series, and her monologue was Tess, an amusing and deceptively innocent short. They then came rapid-fire. Landscape has a man and woman, talking completely at cross purposes, each apparently unable to hear the other. And for this, we had Keith Allen, and Tamsin Grieg giving a star turn with a completely believable Irish accent. Hardest accent in the world to fake, they say. I did love the difference in tone between the two, her all dreamy and nostalgic, him gruff and practical. Apart From That has Lee Evans and Meera Syal on the phone to each other, repeating this meaningless phrase. Girls has Tom Edden desperately trying to recall the details of a story he heard, where a female student presented her male teacher with a note that read "girls like to be spanked". He gets to be quiet in That's All, though, where Lee Evans and Keith Allen are holding a vivid conversation, for all the world like gossiping old women, and all three in curly wigs. Periodically, they look with great suspicion at the silent Tom Edden on the end - hilarious! Ending the first half, we have God's District, where Meera Syal plays an evangelist from North Carolina, spreading the word of the Lord among Londoners, and Monologue, where Lee Evans has a deep discussion with an empty chair. The second half starts with That's Your Trouble, Lee Evans and Tom Edden discussing the universe at a bar, and Special Offer, where Meera Syal receives an offer she can't refuse - or can she? Trouble in the Works is a hilarious sketch between two co-workers, one telling the other that the workers are troubled. Tom Edden and Lee Evans again. Night has Tom Edden and Meera Syal reminiscing about how they met, and the evening ends with the only really downbeat play of this programme, A Kind of Alaska, where Tamsin Grieg plays a woman who wakes from a coma after 29 years, all confused about her current reality. Meera Syal is her sister, Keith Allen her doctor. Quite moving. Having the most plays of any single programme I've seen in this Pinter at the Pinter series so far, this was a most entertaining evening, the majority of the plays comedies, beautifully acted. Whetted my appetite for more.

What a wonderfully designed, directed and acted series of plays. Ingenious use of a simple, multi-purpose... More

What a wonderfully designed, directed and acted series of plays. Ingenious use of a simple, multi-purpose set. Everything worked together beautifully. 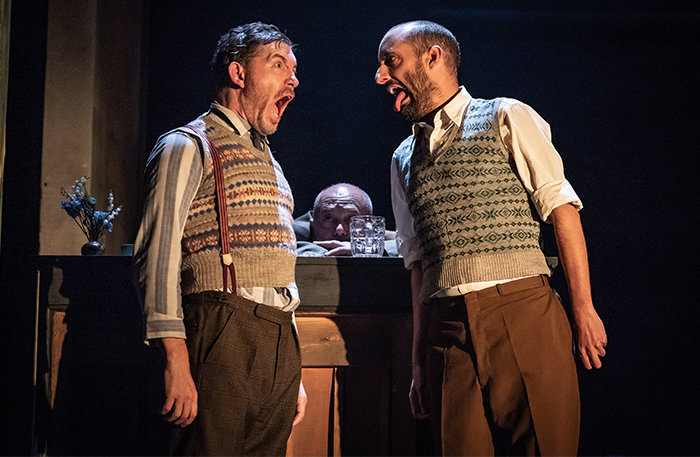 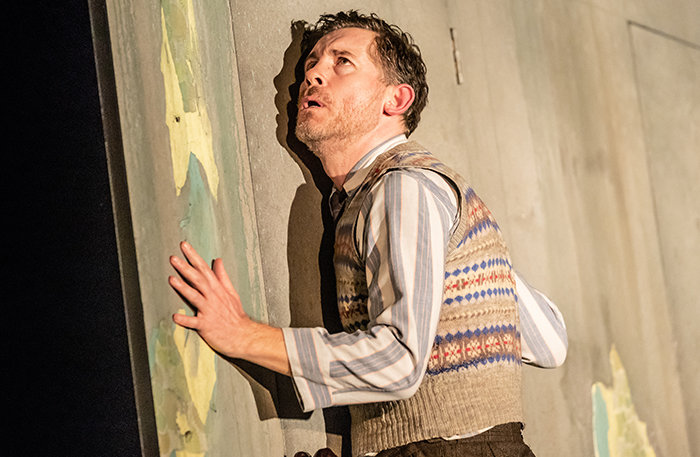 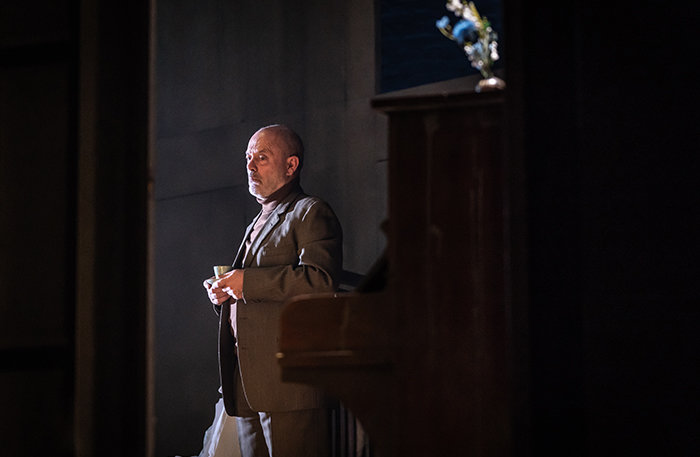 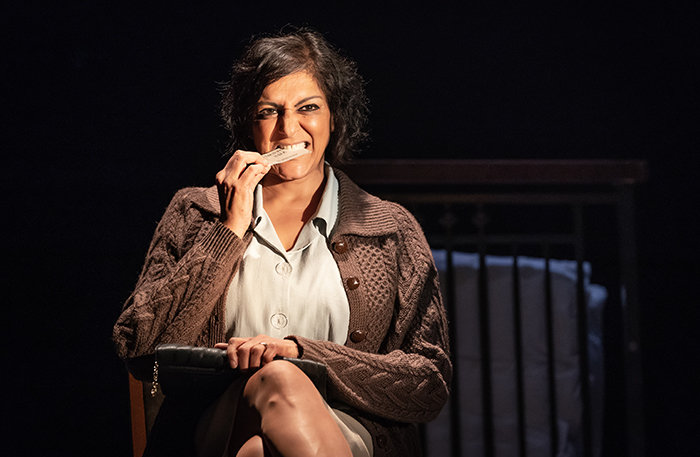 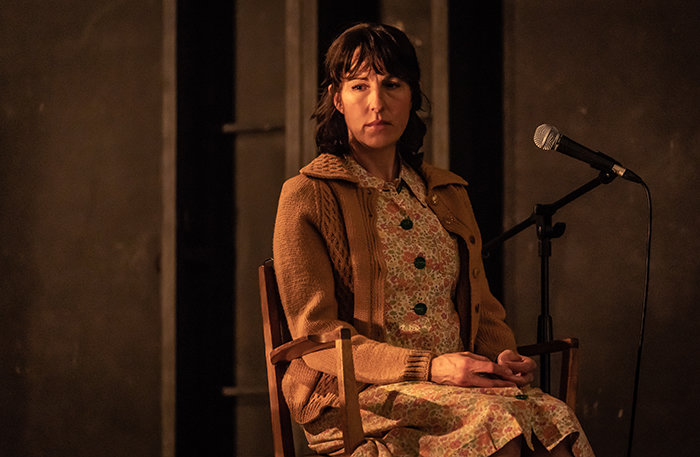