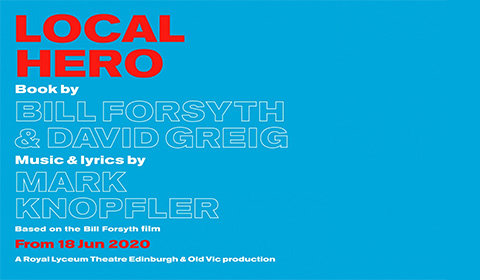 Ambitious executive Mac MacIntyre works for Texan giant Knox Oil. He has been sent to Scotland to buy up a little seaside village to make room for the refinery. As he gleefully embarks on the deal of a lifetime, he soon finds that pricing up this beautiful corner of the world is not as simple as he'd initially anticipated.

The 1983 Scottish comedy-drama Local Hero, on which the musical is based, stars Peter Riegert, Denis Lawson, Fulton Mackay and Burt Lancaster. The stage adaptation, which premiered in Edinburgh in 2019, will transfer to the Old Vic soon, with dates to be confirmed.

The show boasts a book by Bill Forsyth and David Greig (Dr. Seuss’s The Lorax) and is directed by John Crowley (Brooklyn, The Goldfinch). The legendary Mark Knopfler of Dire Straits fame provides songs and music.

Breathe in the fresh sea air and be won over by the inhabitants of an unassuming Scottish village with Local Hero tickets when it drops anchor at the Old Vic.

Sorry this show closed 22 August 2020, we recommend these similar productions.

Local Hero seat view photos show what view you will get for your money. Unfortunately we do not have any seat views for this show.