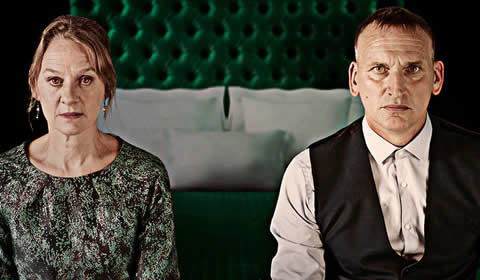 Barbican Theatre
14 seat views
The Royal Shakespeare Company bring Shakespeare’s popular tragedy Macbeth to the London stage, playing at the Barbican Theatre as part of their annual season. A psychological thriller of witches and a doomed Scottish king, the production features a stellar cast and creative team, with Christopher Eccleston making his RSC debut.

One of Shakespeare’s most popular plays, Macbeth follows the title character as we first meet him as a warrior returning from battle, honoured by the ageing King Duncan for his achievements at war. Later, Macbeth has a supernatural encounter with a trio of witches, who implant a seed of ambition that grows into self-destruction, eventually destroying his family and his kingdom.

Christopher Eccleston and Sinead Cusack star as Macbeth and Lady Macbeth. Eccleston makes his debut with the company, best-known for his screen roles in Doctor Who, The A Word and blockbuster Thor. Cusack began her career at the Abbey Theatre in Dublin, before moving to London to work with the RSC. She has appeared in the West End, on Broadway and on screen.

Polly Findlay directs, after most recently directing Beginning, which transferred from the National Theatre to the West End. The production also features design by Fly Davis, lighting design by Lizzie Powell, sound design by Christopher Shutt and movement by Aline David, with music by Rupert Cross and illusions by Chris Fisher.

The RSC comes to London every winter with a collection of shows, with the 2018 season featuring productions of Romeo and Juliet and The Merry Wives of Windsor. Catapulted into a modern world, Macbeth runs at Barbican Theatre from 15 October 2018 to 18 January 2019.

Special notice: Audiences who love their Shakespeare, fans of the stars in the cast and those who don’t have the chance to go to Stratford during the year won’t want to miss out on the chance to see this updated production of Macbeth.

Sorry this show closed 18 January 2019, we recommend these similar productions.

Macbeth seat view photos show what view you will get for your money. Unfortunately we do not have any seat views for this show.