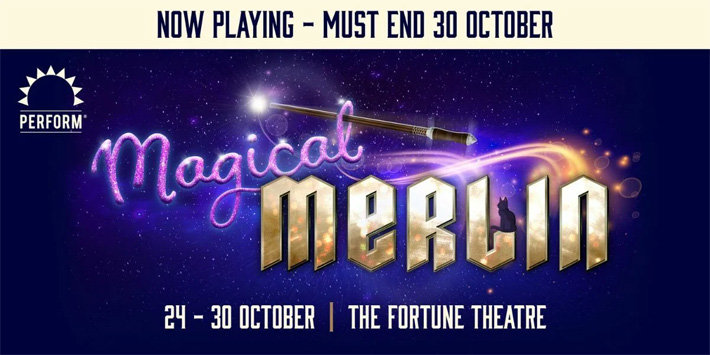 An enchanting musical for kids

Enter a world of magic and mayhem as new mini-musical Magical Merlin flies into the West End for October half term.

Merlin is the best wizard in Ancient Britain, so it’s no surprise that people turn to him in times of trouble! When baby King Arthur is born and his jealous sister Morgan Le Fay starts turning people into animals, Merlin must team up with Sir Lancelot and Princess Guinevere. They ride a fire-breathing dragon to The Lady Of The Lake, who helps them discover where the true power is hidden. But will they return to Tintagel Castle in time?

The enchanting Magical Merlin musical is Perform Production’s second West End mini-musical, after Jungle Rumble delighted families over the February half term. The show celebrates the power of teamwork and believing in yourself, with lots of magic, songs and dancing along the way.

Magical Merlin is written and composed by Will Barnett, co-runner of Perform Productions alongside Lucy Quick. The cast is to be confirmed, but will feature professional performers who bring Merlin’s wondrous world to life.

Book Magical Merlin tickets to keep your kids enthralled by wizards, knights, princesses and more over the school holidays.

Magical Merlin seat view photos show what view you will get for your money. Our users will start adding seat views when the show opens.