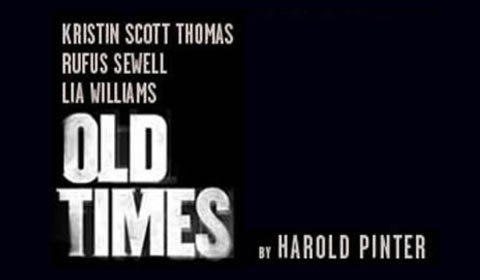 Harold Pinter Theatre
1 seat views
Ian Rickson's Old Times is a suitably mysterious production of Harold Pinter’s purposefully ambiguous play, opening at the Harold Pinter Theatre. Throughout the production, it is never quite clear which character is telling the truth, or what exactly is going on. Instead of alienating audiences, the ambiguity and enigma of the piece has proven a draw, with numerous theories existing over the meaning or truth behind the play.

Old Times tells the story of husband and wife, Deeley and Kate, who receive a visit from old college friend Anna. Instead of being an enjoyable and nostalgic experience, Anna recounts old stories that Kate would rather forget. Tales of underwear swapping, weeping men and dirt covered bodies keep audiences on their toes as Pinter’s play seems to leave one with more questions than answers.

Kristin Scott Thomas, Rufus Sewell and Lia Williams star in Old Times, with Scott Thomas and Williams alternating the roles of Kate and Anna every few performances. Rickson’s decision to alternate roles only adds to the mystery of the play, with each performance bring a new meaning, depth and life to this compelling piece of theatre.

Scott Thomas is no stranger to Pinter or to director Ian Rickson, with both having previously worked together in the critically acclaimed 2011 production of Pinter’s Betrayal. Lia Williams has numerous awards under her belt, including high praise for her performance in Pinter’s The Homecoming. Rufus Sewell, who is known predominantly for his illustrious film and television career, treads the stage boards for the first time since his performance in Tom Stoppard’s Rock ‘n’ Roll.

Special notice: Old Times is a dark, enigmatic and complex piece most suitable for audience members 12 and up. A complex plot that unravels through twisted tales, this show will have theatre lovers on the edge of their seat.

Sorry this show closed 06 April 2013, we recommend these similar productions.

Old Times seat view photos show what view you will get for your money. Unfortunately we do not have any seat views for this show.