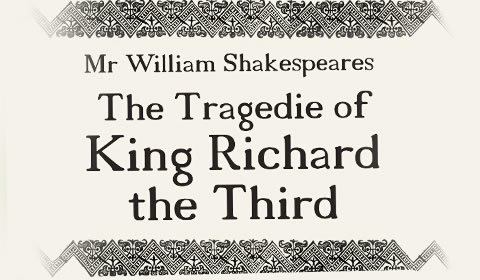 One of Shakespeare’s best-known plays, Richard III follows Richard Duke of Gloucester who is determined to wear the crown of England. After already despatching the current King and his son, all that stands in his way are two imprudent brothers and two innocent nephews who are holed up in the Tower. Woe betide anyone who dares to oppose him, as Richard III is the most conniving monarch of them all.

Directed by Tim Carroll, Richard III features design by Jenny Tirimani, with original music by Claire van Kampen. Conjuring up an authentic Elizabethan atmosphere, Carroll’s acclaimed production features an all-male cast to tell the tale of the Machiavellian King who insisted on ruling with a homicidal and absolute power. Opening at London’s Apollo Theatre, Richard III plays for a limited season only.

Running time: 2 hours and 30 minutes including an interval

Special notice: Not suitable for young children, this production is a must-see for any Shakespeare fan, who will find the traditional setting hugely interesting. Suitable for any theatregoers, catch Mark Rylance in this acclaimed starring role!

Sorry this show closed 10 February 2013, we recommend these similar productions.

SeatPlan Recommends: Seats at the Apollo Theatre offer fantastic views throughout, particularly in the mid-front of the Stalls. However, sit towards the rear of the Stalls or in the higher tiers for some absolute bargain seats with excellent views!

Nobody has added a seat view photo for Richard III at Apollo Theatre yet, please be the first to share your experience.
Your basket is empty.