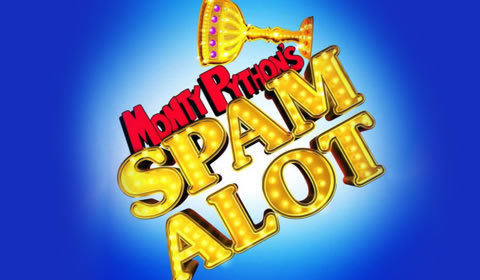 Playhouse Theatre
6 seat views
Adapted for the stage from the cult classic film Monty Python and the Holy Grail, Spamalot is a modern-day musical success. Originating on Broadway and transferring to the West End’s Palace Theatre, the hilarious musical, created by popular Python Eric Idle, receives a revival at London’s Playhouse Theatre, due to popular demand.

Similarly to the 1975 film, Spamalot tells the tale of King Arthur and Patsy in their quest to find the Holy Grail. Monty Python fans will recognise the many comic characters he meets along the way, such as Not Dead Fred, the demanding Knights Who Say Ni, the Black Knight, Sir Lancelot and a somewhat murderous bunny. Additionally, the audiences are treated to new additions, including the diva-ish Lady of the Lake and the residents of the Vegas-style Excalibur Resort. Popular Python jokes appear throughout this show, including the side-splitting ‘shrubbery’ gag, as well as featuring “brave” Sir Robin.

Spamalot has an entirely original score by Python, Eric Idle, including musical numbers such as ‘I’m Not Dead Yet’, ‘The Song that Goes Like This’, ‘Find Your Grail’, ‘Diva’s Lament’ and ‘Run Away’. Spamalot even incorporates the famous ‘Always Look on the Bright Side of Life’, from The Life of Brian.

Created by Idle, alongside the whole Monty Python clan, Spamalot is a collection of the best Python gags, old and new, which will have the audience in stitches. Directed by Mike Nichols, the musical is choreographed by the prolific Casey Nicholaw, with design by Tim Hatley. Continually praised by audiences and critics alike, Spamalot was awarded three Tony Awards in its opening year on Broadway.

Special notice: Spamalot contains the predictable amount of naughtiness from Monty Python, so is not best suited to young children. Children over the age of 12 are welcome to attend the show if accompanied by an adult.

Sorry this show closed 12 April 2014, we recommend these similar productions.

SeatPlan Recommends: Those sitting around seats A-D 1 may be in for a treat! The best seats in the Playhouse are in the middle of the Stalls and Dress Circle sections. Please note that the Upper Circle has limited leg room.