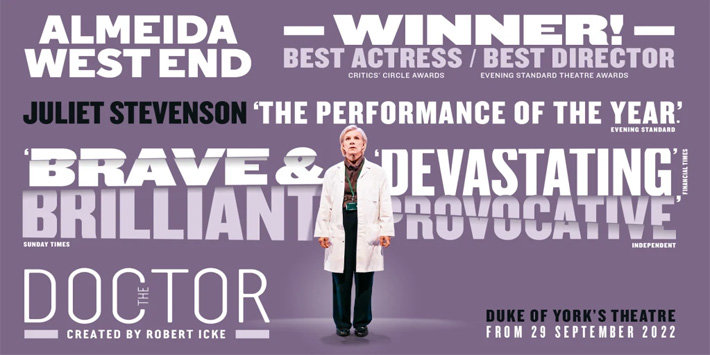 When decorated Jewish doctor Ruth Wolff refuses a Catholic priest admission to her dying patient’s bedside, she unwittingly ignites a fierce debate about science, religion and ethics. In a divided society that is easily guided into outrage or apathy by the media, which side should we take, and who has the moral high ground?

Juliet Stevenson stars as Ruth Wolff, following stunning, award-nominated turns in Mary Stuart and Hamlet. Playwright and director Robert Icke won an Olivier Award in 2016 for his reworking of Greek classic Oresteia. He was the youngest ever recipient of the Best Director accolade at the age of 29.

After generating intense discussion during its premiere at the Almeida Theatre in 2019, the West End run is sure to continue the debate. Make up your own mind and join the conversation with The Doctor tickets at the Duke of York’s Theatre.

Special notice: Please be aware that the production includes discussion of suicide and descriptions of suicide methods.

The Doctor seat view photos show what view you will get for your money. Our users will start adding seat views when the show opens.