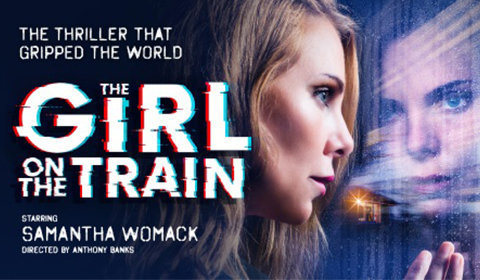 The Girl on the Train tickets

Duke of York's Theatre
35 seat views
After travelling up and down the UK on tour, The Girl On The Train transfers to the West End for a strictly limited season. With a gripping central performance from Eastenders’ Samantha Womack, this psychologically teasing story runs for four weeks at the Duke of York’s Theatre from 22 July.

Based on Paula Hawkins’ best-selling novel, The Girl On The Train is a compellingly dark thriller. Its central character Rachel longs for a different, happier life, and seeks escapism by watching a young couple through the window of her train. However, innocent escapism takes a sinister turn when the wife she has been watching suddenly disappears. Caught at the centre of an investigation that casts her as both witness and suspect, Rachel – and audiences – are kept guessing until the final minutes.

The Girl On The Train has become something of a phenomenon, spurred on by the success of other female-led thrillers including Gone Girl. Following a 2016 film adaptation starring Emily Blunt and Luke Evans, the stage play premiered at Leeds Playhouse (formerly West Yorkshire Playhouse), starring Jill Halfpenny, in 2018. It has since enjoyed a national tour, picking up audiences everywhere from Bath to Coventry.

Samantha Womack stars as Rachel, having previously appeared on stage in South Pacific and The Addams Family. She is best known as a member of the infamous Mitchell family on Eastenders, earning plaudits for her portrayal of Ronnie Mitchell.

The Girl On The Train was adapted for the stage by Rachel Wagstaff and Duncan Abel, and directed by Anthony Banks. Banks is no stranger to national touring theatre, having previously helmed Strangers On A Train and Gaslight. Designer James Cotterill (Journey’s End) and costume supervisor Sian Harris (King Lear at the Old Vic Theatre) round out the creative team.

With its UK tour described by critics as a “first-class thriller” (The Daily Echo) get ready for plenty of emotional twists and psychological tricks when The Girl On The Train arrives at the Duke of York’s Theatre on 22 July 2019.

Special notice: After building up a fan base with the book and film, The Girl On The Train at the Duke of York’s Theatre is perfect for anyone wanting to get caught up in a gripping story. Samantha Womack’s performance is also a must-see.

Sorry this show closed 17 August 2019, we recommend these similar productions.

The Girl on the Train seat view photos show what view you will get for your money. Unfortunately we do not have any seat views for this show.