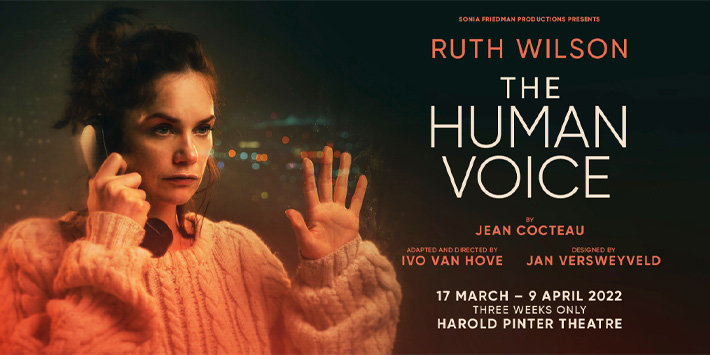 Ruth Wilson returns to the stage

Originally set in 1930s Paris, the play is a monodrama about a woman on the phone to her lover of five years. He is due to marry someone else the next day, causing her to spiral into despair as she begs him to change his mind.

Dramatist and novelist Jean Cocteau’s play was first staged in 1930 and has been adapted both on stage and screen, most recently with Tilda Swinton. Ivo van Hove’s (Network; All About Eve) production premiered in 2009, and has been performed in Sydney, New York and Dublin.

Ruth Wilson is widely acclaimed for her work on-screen in TV dramas Luther and His Dark Materials. On stage, she is the recipient of two Olivier Awards for Anna Christie and A Streetcar Named Desire.

Wilson reunites with visionary director van Hove after the pair’s bold and distinctive Hedda Gabler at the National Theatre in 2016.

Book The Human Voice tickets early to experience an exciting new collaboration between two of theatre’s biggest talents. The play runs at the Harold Pinter Theatre in spring 2022.

Special notice: Please note that performance dates are to be confirmed.

The Human Voice seat view photos show what view you will get for your money. Our users will start adding seat views when the show opens.