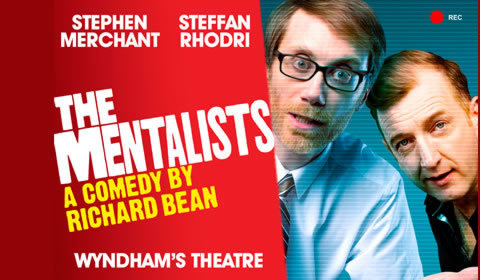 Wyndham's Theatre
21 seat views
Award-winning actor, writer and comedian Stephen Merchant makes his West End debut in a wickedly witty new comedy by Richard Bean. First appearing in 2002 as part of the National Theatre’s experimental season, The Mentalists follows two funny friends who are forced to confront the darker side of their relationship. The Mentalists makes its way to Wyndham’s Theatre for a strictly limited season.

Set within a faceless Finsbury Park hotel, The Mentalists follows a distinctly odd couple who hatch a master plan to revolutionise the world, armed with just a video camera. Ted, a middle manager for a cleaning company, leads the revolution, determined to share his passionate and angry message with the masses. Alongside his chosen accomplice Morrie, a hairdresser and part-time cameraman for soft porn, the pair fantasise about a utopia. But when Morrie begins to suspect Ted’s mounting unpaid bills and cryptic phone calls, the world begins to close in on the tiny hotel room, and it seems that there is only one way to escape. A darkly humorous discussion that remains relevant today, The Mentalists is a brutally funny discussion of social values and personal politics.

Directed by Abbey Wright (Ghosts, The Father), Bean’s two-hander stars BAFTA and Golden Globe Award-winning writer Stephen Merchant alongside critically-acclaimed actor Steffan Rhodri. Best-known for his regular collaborations with Ricky Gervais such as The Office, Extras and Life’s Too Short, Merchant made his name as a stand-up comic and receives his West End debut in The Mentalists. Rhodri’s stage credits include Posh and The Absent, with his extensive screen credits encompassing Doctors and Gavin & Stacey, as well as an appearance in Harry Potter and the Deathly Hallows.

Richard Bean is well-known for his comic masterpieces including the hugely successful One Man, Two Guvnors, and Great Britain, as well as penning the book for the musical adaptation of Made in Dagenham. The Mentalists features design by Richard Kent and lighting by David Plater. A hilarious and touching new comedy about working men battling against the world, The Mentalists arrives at Wyndham’s Theatre for a strictly limited run.

Special notice: Fans of Stephen Merchant will enjoy seeing him do some ‘proper acting’ in this new production. Due to adult language and themes, this production is not suitable for children.

Sorry this show closed 29 August 2015, we recommend these similar productions.

SeatPlan Recommends: Wyndham’s Theatre offers excellent views throughout the auditorium, particularly in the Stalls. Sit anywhere in the Stalls for a perfect view of the stage. Those looking to see the show on a budget should choose the rear of the Stalls or the Upper Circle for a perfectly unobstructed view.

It was really fun. Both actors were amazing.