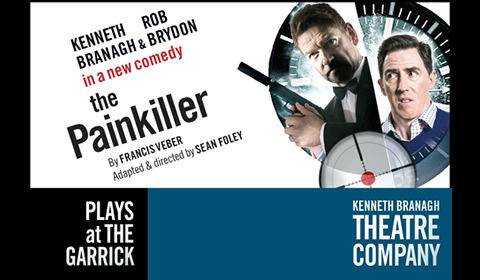 Garrick Theatre
9 seat views
As part of the inaugural season for the Kenneth Branagh Theatre Company, the inimitable Branagh and comedy legend Rob Brydon starred in The Painkiller, an adaptation of Francis Verber’s darkly hilarious farce Le Contrat. A master of comedic double-acts, Verber places two very different men in adjacent hotel rooms. One of them is a trained assassin, the other is desperate to commit suicide. What could possibly go wrong?

Branagh played Ralph, a hit-man hired to assassinate an important witness in a trial at the court house opposite the hotel. Brydon was the “one-man natural disaster zone” Dudley, a cuckolded local press photographer hell-bent on hanging himself in the shower. But when he fails and just pulls the pipes out of the wall, he and Ralph cross paths, and misunderstandings, cases of mistaken identity and hilarious physical comedy ensues. Testament to the skills of Branagh and Brydon, hidden amongst the low-brow gags are moments of poignancy, and the audience left the theatre with their sides aching while feeling unexpectedly moved.

The Painkiller was directed by the Olivier award-winning Sean Foley, who previously collaborated with Branagh on The Play What I Wrote to great success and critical acclaim. Branagh is best known for his stage and film appearances in works by Shakespeare, including Henry V, Hamlet, and As You Like It; though younger audiences will remember his performance as Gilderoy Lockheart in Harry Potter and the Chamber of Secrets (2002). Stand-up comedian Rob Brydon, shot to fame as Bryn West in the TV series Gavin and Stacey and has since hosted several panel shows and recently starred in The Trip (2010) with Steve Coogan.

The Painkiller opened on 5th March 2016 at the Garrick Theatre and played there until 30th April 2016.

Sorry this show closed 20 April 2016, we recommend these similar productions.

SeatPlan Recommends: You’ll want to see as many of the visual gags on offer in The Painkiller as possible – so be aware that the Garrick is tricky for sight-lines due to the many pillars in the stalls section.