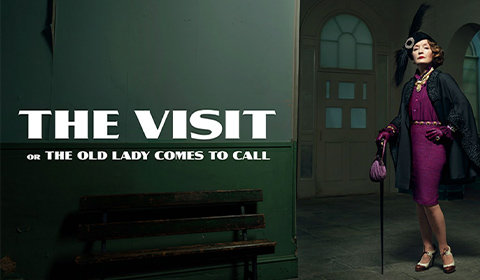 The Visit, or The Old Lady Comes to Call tickets

Please note that remaining performances of The Visit have been cancelled following government advice regarding coronavirus (COVID-19).

Lesley Manville stars as a woman hell-bent on revenge in The Visit at the National Theatre. Transported to the mid-20th century USA by Angels in America playwright Tony Kushner, this thrilling tragi-comedy co-stars Hugo Weaving.

When an enigmatic, impossibly rich woman called Claire Zachanassian returns to the small town she grew up in, it looks like fortune is finally smiling on the struggling citizens of Slurry, New York. She has a bank account that could lift the town out of its post-war recession, and the people are willing to do anything to keep her happy. But prosperity sometimes comes with a terrible price.

Lesley Manville stars as Claire Zachanassian. With two Olivier Awards and four BAFTA nominations to her name, she last appeared on stage in Long Day’s Journey into Night and the award-winning Ghosts.

Hugo Weaving - best known for blockbuster films including The Matrix and The Lord of the Rings - co-stars as Claire’s former lover, with past theatre credits including Solaris and Sydney Theatre Company’s Macbeth.

The Visit is adapted from Swiss playwright Friedrich Dürrenmatt’s play by Tony Kushner, whose epic and ambitious two-part work Angels in America defined a generation of American theatre.

Featuring two first-class actors in an exhilarating game of vengeance, The Visit is a masterful new version of a modern classic. It runs at the National Theatre’s Olivier Theatre until 13 May 2020.

Special notice: Anyone who relishes a complex drama will love The Visit thanks to its gripping story and lengthy running time.

Sorry this show closed 06 April 2020, we recommend these similar productions.

The Visit, or The Old Lady Comes to Call seat view photos show what view you will get for your money. Click 'book this seat' and we will search for availability for your chosen seat.