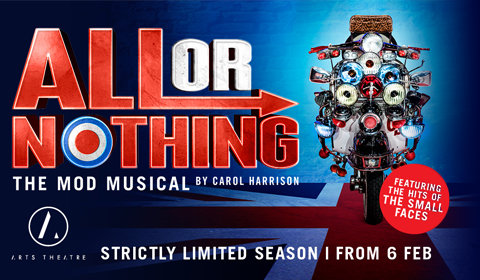 All or Nothing Tickets

Arts Theatre
6 seat views
After playing to packed out audiences across the UK, the sensational new musical All or Nothing – The Mod Musical comes to London for a limited West End season. Playing at the Arts Theatre, the production is based on the music and story of popular rock band Small Faces, and charts their rise and fall from fame.

Written and directed by award-winning actress Carol Harrison, All or Nothing is the home-grown musical that tells the story of four kids from East London who form a band to make it big. It’s 1965 and there’s a new phenomenon. Small Faces eventually becomes the face of “mod”, which encapsulates a new sense of cool style and a taste for rhythm ‘n’ blues.

When the novelty of fame wears off, the band begin to fight as their lives become steeped in jealousy and betrayal. Set to a back catalogue of Small Faces’ biggest hits, the sensational score features songs including “Whatcha Gonna Do About It”, “Tin Soldier”, “Lazy Sunday”, “Here Comes the Nice”, “Itchycoo Park” and “All or Nothing”.

Following the rise and demise of one of the UK’s most popular bands of the time, All or Nothing – The Mod Musical plays at the West End’s Arts Theatre from 6 February to 11 March 2018, with an official opening night on 8 February 2018.

Special notice: Fans of Small Faces and those who remember the mod era will love this musical, which brings to life the popular culture phenomenon! Relive the 1960’s at the sensational production!

Sorry this show closed 11 March 2018, we recommend these similar productions.

SeatPlan Recommends: Seats throughout the Arts Theatre offer good views of the stage, but sit in the mid-centre of the Stalls or front of the Dress Circle for the best overall views of the stage. Sitting toward the rear will also provide an excellent view for a discounted price – but be aware that seats are uncomfortable!

Slip seats are also a good option for those looking for a bargain, although these offer a side-on view of the stage.

Really enjoyed the show about the rise and fall of the group Small Faces great cast of actors who did... More

Really enjoyed the show about the rise and fall of the group Small Faces great cast of actors who did a fantastic job of making it a feel good show some super songs were sang and had the audience up on their feet at the end. Set was well put together with a real lambretta on stage to give it a real Mod feeling.

Great show about the life of small faces group, great story with the fantastic songs they created.

Best show I've been to "MUST SEE SHOW " well put together, top music, great acting, loved it, next level... More

Best show I've been to "MUST SEE SHOW " well put together, top music, great acting, loved it, next level on from Sunny Afternoon.

To me this was a self-satisfied and relatively poor attempt at a jukebox musical.