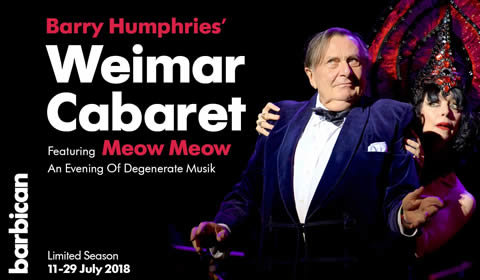 Barbican Theatre
2 seat views
Sit anywhere in the Barbican Theatre for a clear view of the stage. The best views can be found in the Stalls, whilst the circles can seem slightly distant. Avoid the Gallery, as although you can see the stage, it is very distant.

Bargain seats can be found toward the ends of rows and at the rear of the Stalls, where you will be able to see the whole stage without restrictions.

After hugely successful stints across the UK, Barry Humphries’ masterful show Weimar Cabaret returns to play a strictly limited season at the Barbican Theatre. A risqué but sophisticated cabaret show, the production is a tribute to the golden age of jazz-infused music of the Weimar Republic. Barry Humphries’ Weimar Cabaret plays at the London venue throughout July 2018.

Bringing back to life this revolutionary spirit, the production acquaints audiences with forgotten Jewish composers of the time, whose art was condemned as ‘degenerate’ by Nazis. Dancing on the edge of a precipice, Barry Humphries is accompanied by well-known cabaret performer Meow Meow, as the two reveal an enticing score.

Best known for his alter ego Dame Edna Everage, Humphries’ combines witty anecdotes and asides with an incredible back catalogue of phenomenal music, accompanied live on stage by London’s own Aurora Orchestra. His past shows include Remember You’re Out, Back with a Vengeance and his own Farewell Tour.

A celebration of an oft-forgotten golden era of music, Barry Humphries’ Weimar Cabaret plays a limited engagement at the Barbican Theatre, from 11 to 29 July 2018.

Barry Humphries' Weimar Cabaret seat view photos show what view you will get for your money. Click 'book this seat' and we will search for availability for your chosen seat.