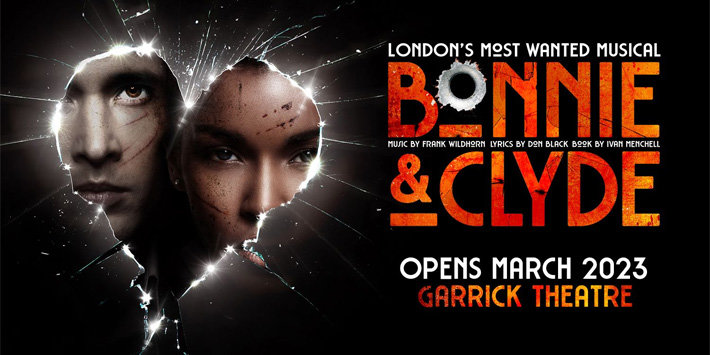 The cult sensation returns to London

Sensational cult musical Bonnie & Clyde returns for a new season at the Garrick Theatre in 2023, promising to "raise a lil' hell" in the West End.

Criminals, outlaws, lovers and folk heroes: Bonnie Parker and Clyde Barrow have inspired the public’s imagination in a way few others can replicate. This passionate and daring musical charts their journey from humble, small-town beginnings to notoriety during the Great Depression.

The Bonnie & Clyde musical has a book by Ivan Menchell, music by Tony Award nominee Frank Wildhorn and lyrics by Academy Award winner Don Black. Amongst its many standout songs are “How ‘bout a Dance” and the beautiful duet between Bonnie and Blanche, “You Love Who You Love”.

Much like its namesakes, Bonnie & Clyde has grown a dedicated following over the last decade. The musical captivated West End theatregoers’ during an acclaimed season at the Arts Theatre and now returns for a second, bigger season at the Garrick Theatre, directed by Nick Winston.

The Bonnie & Clyde London cast is to be confirmed. At the Arts Theatre, Frances Mayli McCann starred as Bonnie opposite Jordan Luke Gage as Clyde.

Find out why this addictive, alluring musical has become such a firm favourite among theatre fans with Bonnie & Clyde tickets.

Bonnie & Clyde seat view photos show what view you will get for your money. Our users will start adding seat views when the show opens.