From the creators of The Greatest Showman and La La Land comes one of the most hotly anticipated new musicals, Dear Evan Hansen. This deeply personal story about social media, mental health and teenage struggles made its UK premier at the Noel Coward Theatre in London in 2019 and has become one of the most important contemporary West End musicals.

The Dear Evan Hansen West End production first opened in November 2019 at the Noel Coward Theatre, receiving widespread critical acclaim. Sam Tutty, who was London’s first Evan Hansen, won the Olivier Award for Best Actor in a Musical. He is one of the youngest actors to win the award, being only 22 at the time.

What is Dear Evan Hansen about?

The Dear Evan Hansen musical explores many contemporary and hard-hitting themes such as social anxiety and isolation, mental health, youth suicide and social media. The plot follows the socially awkward Evan Hansen as he struggles with mental illness and a recently broken arm, along with the usual teenage issues of bullying, crushes and loneliness. On advice from his therapist, he starts writing letters to himself with a positive message each day.

When a classmate, Connor, steals one of Evan’s letters and later commits suicide, the boy’s parents find the letter and assume that he and Evan were secretly best friends. Evan lets this lie grow until it spreads around the whole school and eventually, Evan’s false testimonies of his friendship with the deceased boy go viral – bringing Evan popularity like he could never have imagined and even a kiss from his crush. But will Evan truly want to continue with this falsehood and what are the consequences of living in such a lie?

The music and lyrics for Dear Evan Hansen were written by Benj Pasek and Justin Paul (known collectively as Pasek and Paul) and the book is by Steven Levenson.

Pasek and Paul have achieved great success as song writers, having written the music for wildly popular musical films The Greatest Showman and La La Land. Their other song writing credits include musical adaptations of James and the Giant Peach, Dogfight and A Christmas Story. Their early musical Edges, which they began writing as undergraduates, gained widespread popularity on social media and has seen productions across the world.

What songs are in the Dear Evan Hansen musical

Key songs from Dear Evan Hansen include “Waving Through a Window”, “Sincerely, Me”, “Requiem”, “Only Us” and the immensely popular “You Will be Found”, the original Broadway cast recording of which has over 22 million views on the show’s official YouTube channel.

The original Broadway cast recording was released in 2017 and debuted at number 8 on the Billboard 200. In 2018 the Dear Evan Hansen Original Cast Recording: Deluxe Album was released. This version featured songs cut from the original album as well as a cover of “Waving Through a Window” by Katy Perry.

Is there a Dear Evan Hansen movie?

The Dear Evan Hansen film was released in 2021 and was directed by The Perks of Being a Wallflower director Stephen Chbosky. The film features Broadway’s original Evan Hansen, Ben Platt, in the title role. Platt’s father Marc Platt was one of the producers.

While there was a large degree of excitement amongst fans for a movie adaptation, the film was a commercial and critical disappointment. Many critics felt the stagey aspects of the production did not translate well to film. Some felt that Ben Platt was too old for the role of Evan by the time of filming and others disagreed with the film’s treatment of mental health issues.

While responses to the film are mixed and mostly negative, the stage production remains a powerful commercial and critical force on Broadway, the West End and elsewhere.

Experience a raw, emotional, uplifting and thoroughly contemporary journey with Dear Evan Hansen tickets. This award-winning, acclaimed musical is one of the West End’s most popular shows of the current decade. Book now for an unforgettable night at the Noel Coward Theatre.

Age recommendation: Best for age 12+. Under 4s not permitted. Please be advised that children under the age of 16 may be refused entry if they are not sitting next to an accompanying adult.

Sorry this show closed 22 October 2022, we recommend these similar productions. 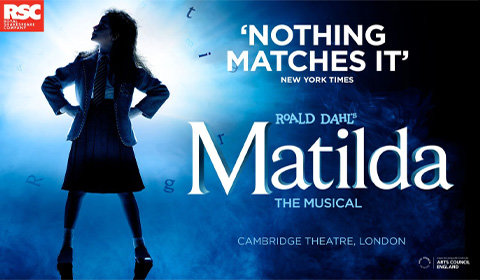 Dear Evan Hansen seat view photos show what view you will get for your money. Unfortunately we do not have any seat views for this show.

Like many I’ve love the music for so long and eagerly anticipate Dear Evan Hansen opening in west... More

Like many I’ve love the music for so long and eagerly anticipate Dear Evan Hansen opening in west end. Overall I thoroughly enjoyed the show. Music is incredible, acting phenomenal! I knew the storyline before going in and knew it wasn’t my favourite then personally it’s a bit too “high school” for my preference. That being said I really did enjoy it so much, I laughed and I cried, an emotional rollercoaster to say the least and I will be going back to see it again!

Very American. Very smultzy (if that’s even a word). Some great songs but some throwaway tracks.... More

Very American. Very smultzy (if that’s even a word). Some great songs but some throwaway tracks. Sam Tutty gives a great performance. Rebecca Mckinnis (who was mum in Jamie) gives another heartfelt performance. Rest of the cast credible.

I didn't expect to like the show but I loved it. It's funny and emotional at the same time. I thi... More

I didn't expect to like the show but I loved it. It's funny and emotional at the same time. I think that everyone can relate to the characters in this show. I would take teenagers to see it and maybe you can use it to start a conversation about mental health.

Believe the hype! This is an incredible story told and sung beautifully by the perfect cast who a... More

Believe the hype! This is an incredible story told and sung beautifully by the perfect cast who are performing their socks off. It was so good that it gave me chills and I know I’ll still be thinking of this show for a few days time.

Evan Hansen is a 17 year old who suffers with social anxiety, and has been given assignments by h... More

Evan Hansen is a 17 year old who suffers with social anxiety, and has been given assignments by his therapist to write to himself on why “today is going to be a great day.” When a fellow classmate with no friends and some serious issues takes his own life, he is found with one of Evan’s said letters on him. What starts as a misjudged lie from Evan, to help a grieving family, begins to spiral out of his control and affect everyone around him. Although this show comes with a backdrop of real hard hitting subject matter, it is a dark comedy mainly at the expense of Evan Hansen, who has created an imaginary friendship between him and the late Connor, especially as there is a girl’s affections at stake, who just happens to be Connor’s sister. (“Sincerely Me” is a brilliantly comic performance between Evan, Connor and Jared). I cannot sing the show’s praises highly enough: Sam gives a thoroughly captivating performance as Evan: you can feel Evan’s awkwardness, and easily get swept away with his emotions. The supporting cast were a total powerhouse in themselves; each and every one of them were nothing short of mesmerising. The soundtrack comes with punchy numbers I can only describe as a mix between rock, country and anthemic that compliment the emotions of the show. But it is the vocal talent of the entire cast (especially Evan, Zoe and Heidi) that can make your spine tingle, or your eyes mist over. The staging is kept simple (e.g. a bed, a dining table, or a sofa) so as not to detract from the brilliance of the acting/singing. However, there is a lot of use of social media projections used around the stage area, which adds to the credence of today’s way of communicating. This show taps into your emotions, with a hunger to see it again. If not for it closing this weekend, I would surely have booked a return visit.

Been desperate to see this show for soooooo long and I wasn’t disappointed and enjoyed the whole... More

Been desperate to see this show for soooooo long and I wasn’t disappointed and enjoyed the whole thing. One negative comment is that at times the volume of the singing was too loud , and came out (my opinion) as screeching and I had to cover my ears as it was “painful “ to listen to. However , the acting was superb and something you need to put on your bucket list. I wouldn’t say this was suitable for someone with Autism. The flashing bright lights and the loud noise could upset someone who is “sensitive”. 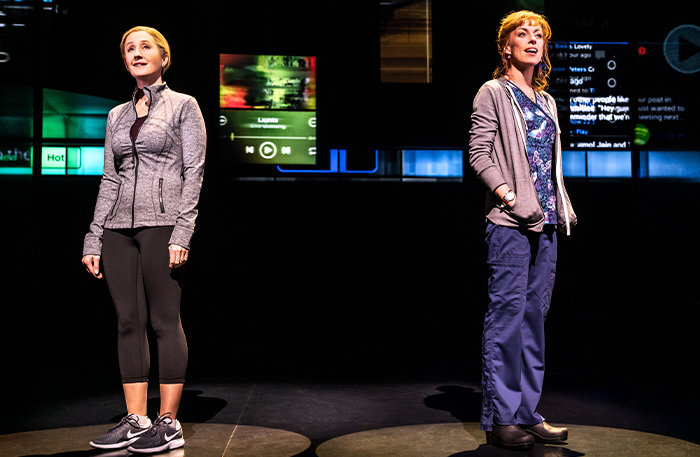 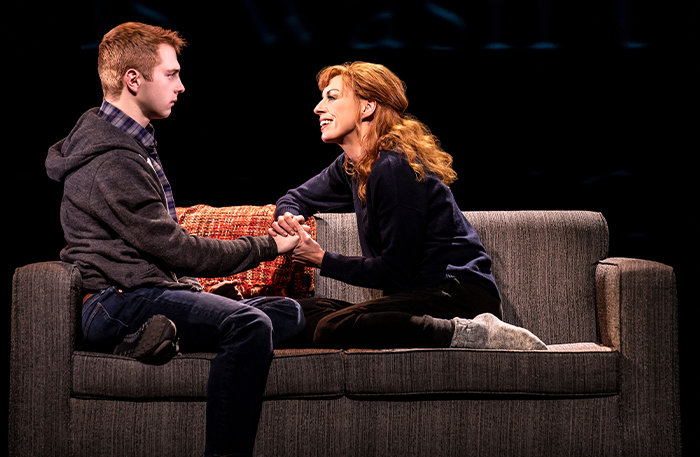 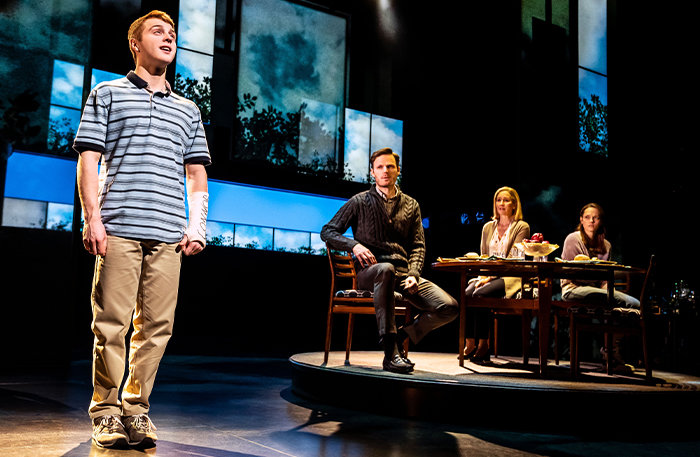 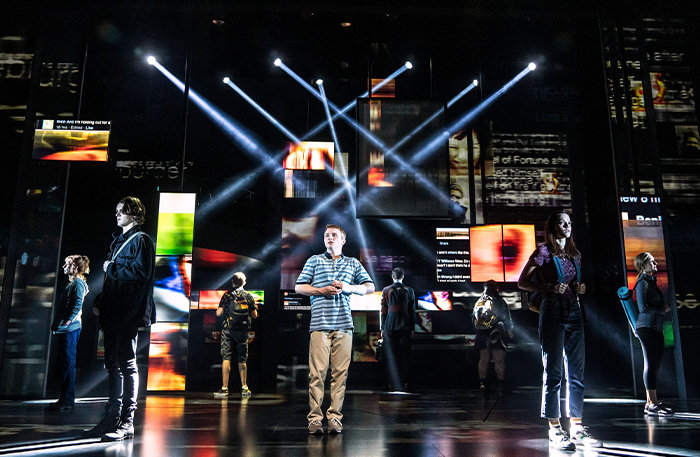 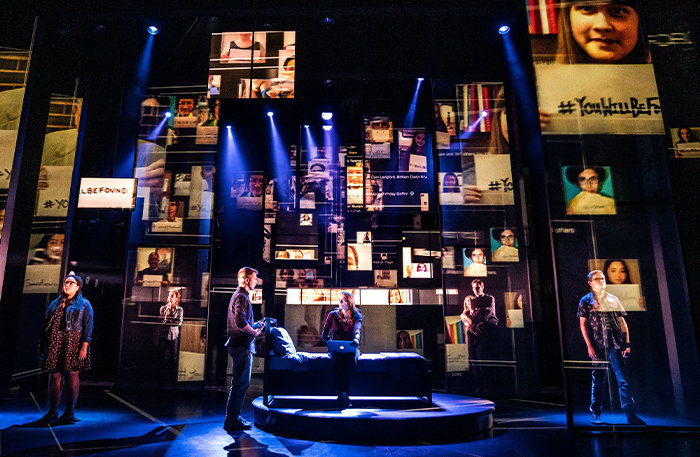 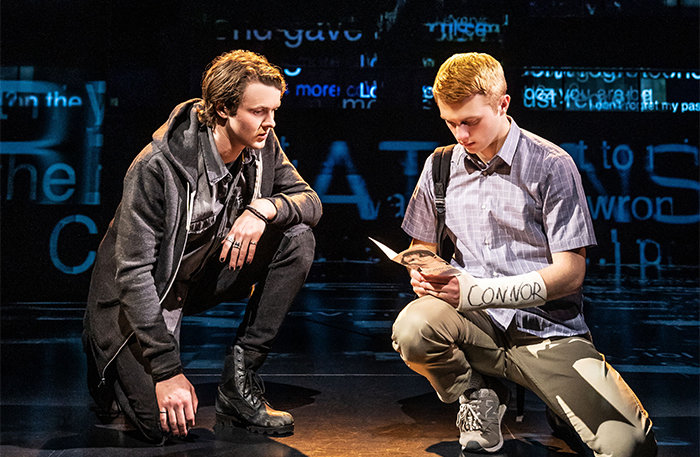