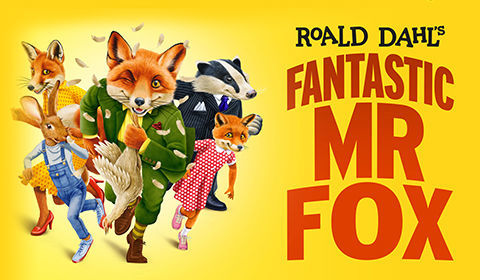 The tale follows three farmers, Boggis, Bunce and Bean, who are greedy, smelly and nasty, but most of all hate Mr Fox. The complete opposite of the trio, Mr Fox is clever, smart and most of all fantastic. He completely underestimates how far the three will go to get revenge on him.

As Mr Fox often says himself, “You know as well as I do: no-one outfoxes a fox!”, but with the evil farmers on his tail, can he think up an ingenious plan to save his friends and family? Can he escape the diggers and outsmart the farmers? And can his good friend Rabbit keep quiet long enough not to give them away.

Road Dahl’s Fantastic Mr Fox is an ideal play for all the family packed full of fun. A story of greed, pride and the power of friendship, packed full of live music and songs.

Roald Dahl is one of the greatest children’s authors of all time, with his work continually being adapted, including the hugely successful Matilda – The Musical by Tim Minchin and the Steven Spielberg movie version of The BFG.

Fantastic Mr Fox is the perfect opportunity to relive one of his most exciting stories, in a brilliant new version by the up and coming young playwright Sam Holcroft. Holcroft’s work has become critically acclaimed, with plays such as Rules For Living and Edgar and Annabel being produced by the National Theatre.

Many of the original cast return, including Greg Barnett as Mr Fox, with Richard Atwill as Rat/Bean, Raphael Bushay as Badger/Boggis, Lillie Flynn as Mrs Fox, Sandy Foster as Rabbit, Jade Croot as Kit and Gruffudd Glyn as Mole and Bunce.

Roald Dahl’s Fantastic Mr Fox plays performances at the Lyric Hammersmith Theatre in London from the 26th July until 20th Aug 2017. This is definitely one family theatre trip not to be missed!

Special notice: Packed full of songs and telling one of the most loved of all Roald Dahl’s stories, Fantastic Mr Fox really is the perfect show for all the family. Those whose kids have loved the film version of The BFG, the stage version of Matilda, or just reading the classic books themselves should have yet another fun filled time here.

Sorry this show closed 20 August 2017, we recommend these similar productions.

SeatPlan Recommends: The Stalls generally offer good views at the Lyric Hammersmith, with support pillars only at the end of rows which does not hinder views. The Circle does begin to overhang the stage about two thirds of the way back, however is not a huge problem.

The Circle is a fairly small section and well raked meaning audience members towards the rear still have clear views. There is a safety rail in front of Row A however meaning views can be slightly less than ideal, however legroom can also be quite tight in this row. The Upper Circle is of a similar size, however safety rails get far more in the way in this section and should be watched out for if buying seats in Rows A-C.

Absolutely fantastic show it is so funny and so well put together. Enjoyed every moment of it!

What a wonderful show with brilliant humour and so entertaining!

What a brilliant show with great humour and so wonderful!

talvanycarlotto 23 Feb 2017
Your basket is empty.