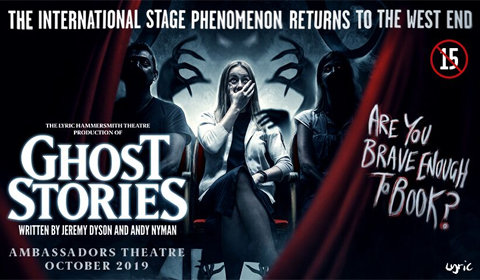 Ghost Stories returns to the West End for another edge-of-your-seat run, guaranteed to leave audiences thrilled. Delving into our worst fears and deepest impulses, the exhilarating play runs at the Ambassadors Theatre.

Narrated by Professor of Parapsychology Mr. Goodman, Ghost Stories probes into the supernatural and spooky by recounting tales of things that go bump in the night. Based on Goodman’s research into three unusual encounters with the uncanny, Ghost Stories tickets deliver shocks, psychological second-guessing and a singularly terrifying visit to the theatre.

Ghost Stories premiered at Liverpool Playhouse in 2010 and has since enjoyed multiple West End runs, including a stint at the Duke of York’s Theatre that same year. The play was adapted for film in 2017, starring Andy Nyman, Paul Whitehouse and Martin Freeman.

This thrilling drama is co-written and directed by Andy Nyman and The League of Gentlemen's Jeremy Dyson, and in the West End, Simon Lipkin stars as Professor Goodman.

Poltergeists, phantoms and flickers in the corner of your vision: are you brave enough to step into Ghost Stories?

Special notice: The show’s creators recommend that anyone of a nervous disposition think carefully before booking tickets for the show, whilst moments of extreme tension and shock factor make it unsuitable for those under 15.

Ghost Stories seat view photos show what view you will get for your money. Click 'book this seat' and we will search for availability for your chosen seat.