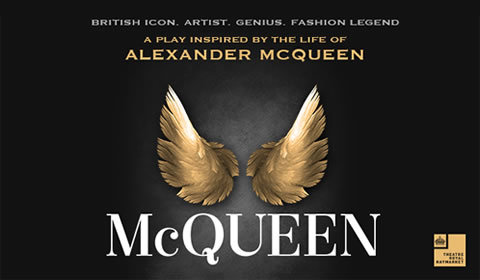 Taking place on a singular London evening, McQueen steps into the visionary imagination and dark dreamland of McQueen as he meets a girl that inspires him. After watching the Mayfair house for eleven consecutive days, a girl decides to break in to steal one of his legendary dresses and become someone special. When McQueen catches her, instead of calling the police, together they embark on a journey through London and into his heart. A play about beauty, art and imagination, McQueen sees two troubled souls connecting over comfort that they desperately crave.

McQueen sees Phillips’ second major West End play performed, after Hidden in the Sand at the Trafalgar Studios, and it has been adapted and slightly rewritten since opening at the St James. His previous works include The White Whale, City Stories and Camelot: The Shining City. The production features design by David Farley, lighting by David Howe, sound by John Leonard and choreography by Christopher Marney. Enter the complex mind of one of the world’s greatest designers in a play about love, redemption and above all, inspiration.

Running time: 2 hours including an interval

Special notice: Fans of the St James production will enjoy a slight revamp for the West End. The production contains very strong language and is not suitable for children. There is a strict age limit of 13 and up.

Sorry this show closed 07 November 2015, we recommend these similar productions.

SeatPlan Recommends: Sit in the middle of the Stalls for the most comprehensive view of the stage. Good views on a budget can be found in the higher tiers.