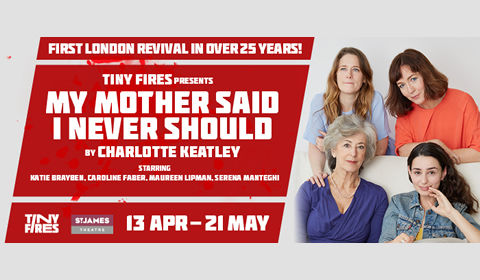 My Mother Said I Never Should tickets

The Other Palace
1 seat views
Charlotte Keatley’s ground-breaking production My Mother Said I Never Should makes a well-deserved London debut at the St James Theatre. Directed by the prolific Paul Robinson (High Society, 42nd Street), the production follows four generations of women as they struggle with family, marriage and motherhood.

Set across four generations and beginning in 1900, My Mother Said I Never Should follows the illegitimately born Doris, who exchanges a potentially successful teaching career to become a wife and mother to her own daughter, Margaret. Once the war is over, Margaret marries an American and gives birth to Jackie. As Jackie grows up, she becomes a typical 60's rebel, accidentally becoming pregnant on the way. When Jackie gives birth to Rosie, it becomes clear that she cannot cope with single motherhood and it is decided that Rosie will be brought up to believe that Margaret is her mother. An intimate and heart-breaking exploration of gender expectations across the years, My Mother Said I Never Should discusses topics that are increasingly relevant today.

Written in 1985, Keatley’s play remains startlingly up to date and is the most commonly performed play be a female playwright. In a new staging at the St James Theatre, My Mother Said I Never Should addresses social issues that are commonplace in the present day. The pertinent play features set design by Signe Beckmann, costume by Helen Coyston and lighting design by Johanna Town, with original compositions and sound by Simon Slater.

My Mother Said I Never Should was part of the spring season at the St James Theatre which is supporting female playwrights, as well as placing a particular emphasis on leading roles for women. With Miss Atomic Bomb also on the bill, the theatre is determined to showcase substantial female roles. My Mother Said I Never Should opened at the St James Theatre in April 2016.

Special notice: Fans of Kealtey’s commonly performed play will enjoy this revamped version, directed by Paul Robinson. Those who enjoy work by Caryl Churchill will find a similarity in this production.

Sorry this show closed 21 May 2016, we recommend these similar productions.

SeatPlan Recommends: The St James is an intimate theatre which offers good views throughout the auditorium, particularly in the Stalls.