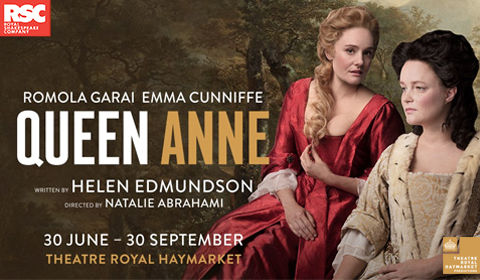 Theatre Royal Haymarket
43 seat views
The Royal Shakespeare Company are set to bring their production of Queen Anne by Helen Edmundson to the Theatre Royal Haymarket, following an acclaimed run in Stratford-upon-Avon. Queen Anne is set to begin previews on 30th June 2017, with an official opening on 10th July and continuing its strictly limited season until 30th September 2017.

Queen Anne originally opened at the Swan Theatre in Stratford-upon-Avon during Winter 2015, where it was overwhelmingly well received by audiences and sold out its initial season.

Beginning in 2017 with William III leading the nation and the country on the verge of war, Princess Anne is soon to become Queen and her advisors battle for influence over the future Queen. Her close personal friend, Sarah, Duchess of Marlborough, begins to increase the pressure in order to advance her own power. Fighting off blackmail and deception, Anne needs to decide where her allegiances lie and what is more important – the country or friendship.

Set between her accession in 1702 and her husband George’s death in 1708, Queen Anne depicts the heavy influences the Duchess ended up having on the Queen’s reign.

Queen Anne is written by Helen Edmundson, one of Britain’s most acclaimed writers of screen and stage. Her recent adaptation of Therese Raquin on Broadway was nominated for Outstanding New Broadway Play at the Outer Critics Circle Awards, while she won the 2005 Time Out Award for Coram Boy, and 1994 TMA Awards for The Clearing and The Mill on the Floss.

The play stars Romola Gari as Sarah, Duchess of Marlborough. Gari is known for her various work on stage and screen, including the films Atonement, Suffragette and Amazing Grace and plays Measure for Measure, Three Sisters and The Village Bike.

She is joined by Emma Cunniffe (Tales from Hollywood, Losing Louis and Women Beware Women), who returns to her role of Queen Anne, after originating in it during the 2015/2016 season at the Royal Shakespeare Company’s Stratford-upon-Avon home.

Set to be one of the most exciting transfers of 2017, Queen Anne is the perfect opportunity for West End audiences to catch one of the most universally acclaimed new Royal Shakespeare Company production. Previews of Queen Anne are set to begin at the Theatre Royal Haymarket in London’s West End on 30th June 2017 and run for a limited season until 30th September 2017.

Special notice: Queen Anne is perfect for those who regularly enjoy the Royal Shakespeare Company’s repertoire but are interested to see a new and exciting story with its roots in one of the most unique and interesting tales of the British monarchy.

Sorry this show closed 30 September 2017, we recommend these similar productions.

SeatPlan Recommends: The Stalls give the best views in the Theatre Royal Haymarket, but tend to be quite expensive. The very front and rear rows can offer better value, however a slight Circle overhang and high stage can restrict views.

The Royal Circle and Upper Circle will generally offer good sightlines of the stage, however with curved rows, seats towards the end can be very side on.

The Gallery is very high and quite distant, making it the cheapest section in the theatre, but can give the best bargains.