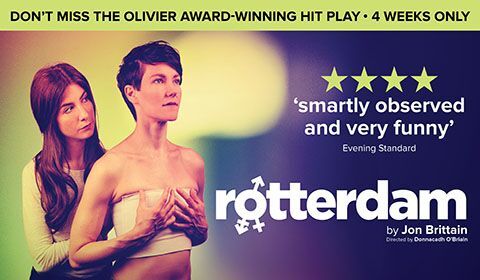 Arts Theatre
13 seat views
Following a sold-out season at Trafalgar Studios, Jon Brittain’s Olivier Award-winning drama Rotterdam transfers to the West End. The production played a limited four week season at the Arts Theatre, the play is described as a bittersweet comedy focusing on gender, sexuality and finding yourself a long way from home.

Originally premiering at Theatre503, Rotterdam sees Alice preparing to come out to her parents as a lesbian, via a well-worded email. But before she has a chance to press send, her girlfriend Fiona reveals a secret of her own. When Alice learns that Fiona would like to start living as Adrian, she is forced to ask a question she never thought she would… Is she straight?

After a critically acclaimed run at Trafalgar Studios in 2016, Rotterdam went on to receive the award for Outstanding Achievement in an Affiliate Theatre at the 2017 Olivier Awards. Directed by Donnacadh O’Briain, the play features design by Ellan Parry, lighting by Richard Williamson and sound by Keegan Curran.

Jon Brittain’s previous plays include What Would Spock Do?, The Easter Rising and Thereafter and A Super Happy Story (About Feeling Super Sad), as well as directed festival hit Maggie Thatcher Queen of Soho.

Special notice: Those who missed the opportunity to see it at previous venues now have the chance to watch the pertinent Olivier Award-winning play in an equally intimate West End venue. Perfect for the young generation, this educational play is a must see.

Rotterdam is suitable for those aged 14 and up.

SeatPlan Recommends: The Arts Theatre have good seating throughout the auditorium, due to it being an intimate venue. For plays such as Rotterdam, it is best to sit in the middle of the Stalls to feel most involved. Avoid sitting in the first three rows, as the stage is high and cuts off a lot of action.

Bargain hunters should aim for the rear of the Stalls, where a good view can be achieved despite the Circle overhang. If you want incredibly cheap seats, choose the bench seats in the Circle! These may be slightly uncomfortable, but there’s an excellent view, particularly in seats 8-14.